New ambassador of the Kingdom of Bahrain accredited |09 June 2021 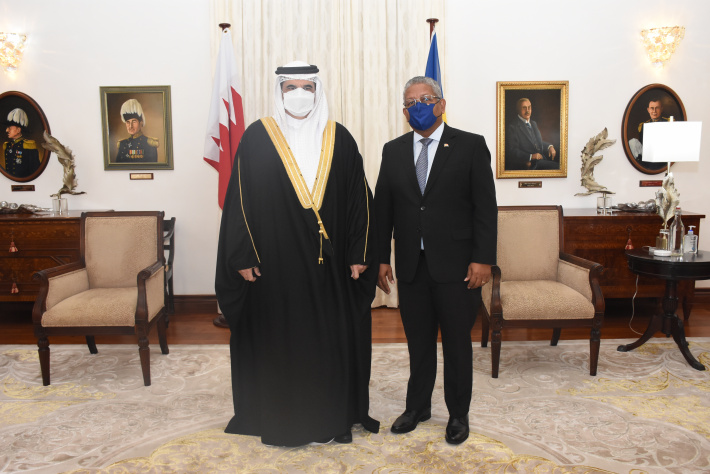 The new ambassador extraordinary and plenipotentiary of the Kingdom of Bahrain to the Republic of Seychelles, Sheikh Khalid Bin Abdullah Al Khalifa, presented his credentials to President Wavel Ramkalawan yesterday morning at State House.

This was in the presence of the Minister for Foreign Affairs and Tourism, Sylvestre Radegonde.

Speaking to the press after his accreditation, Ambassador Al Khalifa said that moving the diplomatic relations between the two countries further and cooperation in tourism and the economic sector were the main topics of discussion with President Ramkalawan.

In the light of economic difficulties, as the number one challenge of post Covid-19, the ambassador said that there is a plan for both island countries to work together economically especially in the tourism and banking sectors with the engagement of the private sector.

He added that this will be cemented through further discussions with representatives from the Ministry of Finance, Economic Planning & Trade and from the Ministry of Foreign Affairs & Tourism during his stay in the country, as well as the signing in the near future of a memorandum of understanding between the Bahrain Chamber of Commerce and the Seychelles Chamber of Commerce and Industry (SCCI).

“Today Mr President honourably welcomed me in his office and congratulated me as a first ambassador of the Kingdom of Bahrain to Seychelles. He talked about the great relations between the two countries and how we can move it forward especially in those days where we have a lot of challenges in terms of the Covid-19 which we are facing at the moment and what after the Covid-19,” the ambassador said, noting that now it will be part of his job to move the relations on a different level to support both countries.

It is to be noted that the Al Salam Bank Seychelles has its head office in Bahrain.

Ambassador Al Khalifa also paid a courtesy call on Vice-President Ahmed Afif. He said that he will relate all of his discussions with the Seychelles authority to His Majesty King Hamad bin Isa Al Khalifa who is a friend of Seychelles.

Ambassador Al Khalifa, who is based in Abu Dhabi, United Arab Emirates, leaves the country on June 11, 2021.

Seychelles and Bahrain established diplomatic relations on May 4, 1983.