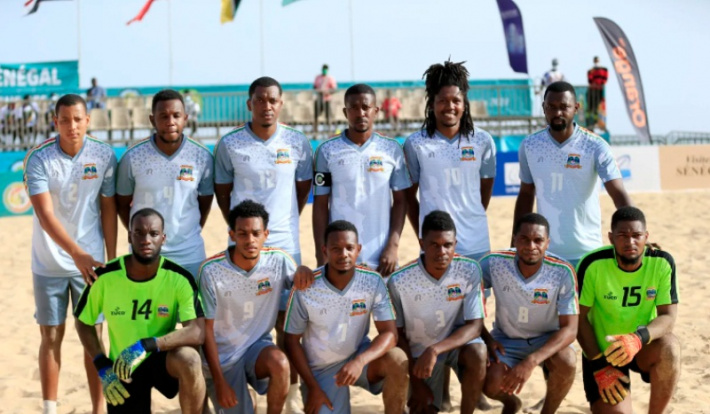 Poor preparation prior to a competition of that magnitude was the main factor behind Seychelles’ poor performance at the recently-held African Beach Soccer Cup of Nations at the Saly Beach Soccer Stadium in Senegal, coach Don Anacoura has said.

He was giving his reaction on the national selection’s performance which was highlighted by three defeats in as many matches in group B to finish last out of four teams.

In their first match, the boys of coach Anacoura lost 2-5 to Morocco, before losing 3-7 against Mozambique in their second group encounter. And in their last group match against the Pharaohs of Egypt, Seychelles suffered a heavy 2-12 defeat to bow out of the tournament.

Coach Anacoura firstly explained that the level of competition, compared to the level of the preparations, were two different things.

He noted that as a whole, the boys gave their best, based on their preparations, compared to that of their opponents which were on top form and ready for the tournament.

He explained that the local boys did not even play a test match while in training which lasted for three weeks, and they mostly trained individually.

Despite the poor performance, coach Anacoura noted that the gap between Seychelles and other countries on the continent is still closable, while some drastic changes need to be done, including a change of mindset towards the sport, as well as adopting new approaches.

He explained that with better preparations, and the above-mentioned suggestions, Seychelles can perform better at such competitions.

Commenting on Seychelles’ first match where they managed to contain Morocco in the first two periods, before losing their grip on the match in the third period, coach Don Anacoura said it was both a matter of endurance and maturity.

He noted that all the African countries were active prior and during the competition, while football has been dormant in Seychelles.

“From scratch, we stepped into a high-level tournament. So it is normal not to expect a lot,” explained the Seychelles’ head coach who further added that, despite not being satisfied with the outcome, he acknowledges that the players gave their all, based on their level of preparation.

Meanwhile, hosts Senegal successfully defended their title as the Beach Teranga Lions defeated Mozambique 4-1 in the final to win their third successive title after 2016 and 2018.

A brace from Raoul Mendy guided Senegal to the final win, as they celebrated victory in front of their fans in the presence of Confédération Africaine de Football (Caf) president, Dr Patrice Motsepe.

Raoul Mendy opened the scoring for the hosts, but Mozambique equalised via Ramosette Cumbe.

Senegal waited until the second period to take the lead again through Ninou Diatta, before Pope Boye made it 3-1.

Mendy completed his brace scoring the Lions’ fourth goal and his fifth of the competition.

Despite losing the title, debutants Mozambique would celebrate reaching the final in their first ever BSAFCON.

Mozambique’s Nelson Manuel was named the tournament’s best player, in addition to winning the top scorer trophy with 10 goals.

Morocco won the bronze medal after beating Uganda 5-3 in the third-place playoff earlier in the day.

The final ceremony also witnessed the handing over of the Caf flag to Feizal Sidat, president of the Mozambican Football Federation as Mozambique will host the next African Beach Soccer Cup of Nations (BSAFCON) in 2022.