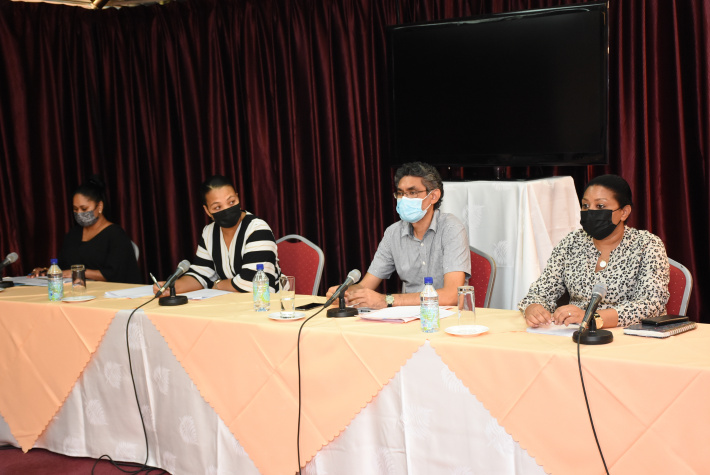 The panelists at the press conference (Photo: Joena Meme)

• No sale of food in tents at Beau Vallon, state the authorities

Following meetings held last week, the relevant authorities have concluded that all craft and food vendors who want to operate at the former Bazar Labrin Beau Vallon site will have to tender their applications through the Enterprise Seychelles Agency (Esa).

The terms and conditions for operation at the popular Beau Vallon site were explained in a press conference held on Wednesday.

Key among the changes in operations at Beau Vallon is that it is now mandatory for all food vendors to sell and process food and beverages in a food van or trailer, as per the guidelines provided by the Public Health Authority.

To ensure food safety and hygiene, food vendors will not be allowed to operate under a tent as had previously been the case.

Meanwhile craft vendors will be able to sell their goods in their own tents of size 3x3 metres only, as no other tent sizes are permitted.

There are only 26 spaces identified for the craft vendors to occupy and 6 spaces for food vendors, according to Ms Appoo.

Fruits and vegetable vendors may resume their activities without much ado aside from respecting Covid-19 regulations and receiving formal permission for the district administrator.

Up until Wednesday, Esa has registered 13 craft vendors who have signed the agreement to start selling their crafts at Beau Vallon while another eight are on a waiting list.

Vendors who wish to apply for a space can do so at Esa’s office at Camion Hall on Mondays and Tuesdays from 8am to 12pm, Ms Appoo added.

Ms Appoo explained that the spaces are being allocated on a first come, first served basis although priority is being given to applicants who used to be participants of the Bazar Labrin event and were already registered with Esa.

All registered craft vendors are requested to make a contribution of R100 for each day they are on site.

In regards to food vendors, their applications will be assessed by an independent committee on a competitive basis and the application with the most scores will be eligible for a space.

The relevant authorities are also being extremely stringent on the requirement that food vendors must have, such as a manufacturing and retail license with the Seychelles Licensing Authority (SLA), to operate at the Beau Vallon site.

The terms and conditions do not permit vendors, particularly food vendors, to add any sitting areas, extra tents or any features that are not integral part of their trailers or vans.

“Public Health has always been concerned about how food were being cooked and sold in tents in the area since it was not hygienic. There were many hygiene and food safety issues which came up in the past and now with Covid-19 in play, we came up with a decision that would bring an end to selling of food in tents,” explained Mrs Lawrence.

She noted that results of certain samples of food that were taken from vendors at Beau Vallon in the past had shown that they had not been safe for consumption and Public Health had even encountered cases of food poisoning from the food sold in these tents.

“From now on, if vendors want to come on the Beau Vallon site they would have to have a mobile food van or trailer to sell their items on a daily basis. To note, the Bazar Labrin activities were supposed to occur only once a week but it became a more regular thing where people started selling food there every day in tents. This created a lot of issues with already licensed businesses so in order to set things right, we have established that food vendors should have an appropriate location and premises for their activities. Get your license and then you can come to Beau Vallon,” stated Mrs Lawrence.

Mrs Lawrence nonetheless noted that exceptions for sale of food and beverages in tents can be made for one-off occasions such as Regatta and national events.

“Fruit and vegetable vendors can continue with their activities but ensure they are registered with the district administrator and get their letter permitting them to sell their produce. While selling their produce, the vendors must ensure they do not engage in any processing such as making juice,” stated Mrs Lawrence.

It is also not permitted for fruit vendors to set up any structure or kiosks to sell their produce.

With the closure of the Societe Seychellois d’Investissement this month, many of its properties, including the Beau Vallon site, have been placed under the management of the Ministry of Lands and Housing.

“In regards to the property to the land on the mountainside, the ministry and other partners have decided to temporarily allow craft vendors to pitch their tents to sell their artisanal items and we will later look into constructing more permanent kiosks for them,” explained PS Choppy.

He noted that the Ministry of Land and Housing has a long-term plan for the location, albeit different than initially planned by the SSI, which would take into account spaces for craft and food vendors but this plan is waiting to be approved by the cabinet of ministers.

On her part, PS Antat noted that the department of entrepreneurship is looking to find the right balance between imposing necessary regulations and encouraging entrepreneurship so as to foster a thriving business environment.

A task force composing of the relevant agencies and ministries, along with the Seychelles Police Force and the Beau Vallon district administration, have been set up to ensure that these terms and conditions are abided by and that the area remains safe and secure.

The authorities are also working to come up with a new name for the site to dissociate the site from the name ‘Bazar Labrin’ as it is often referred to.