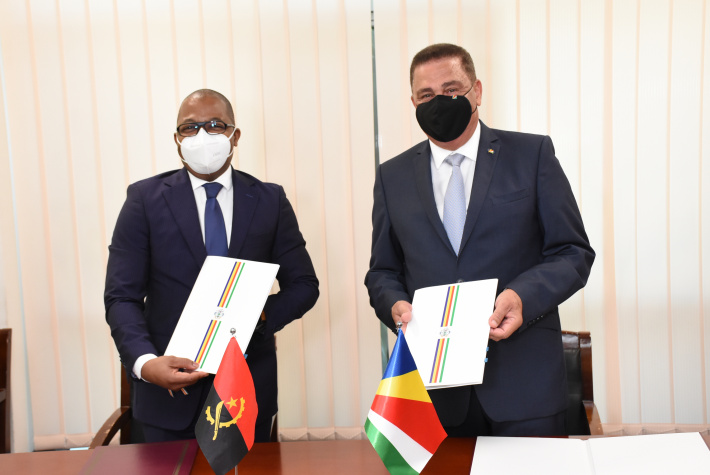 Two agreements aimed at reinforcing the relationship between Angola and Seychelles have been signed.

The General Cooperation Agreement and the Agreement on the Creation of a Bilateral Commission were signed yesterday on behalf of Seychelles by the Minister for Foreign Affairs & Tourism Sylvestre Radegonde and on behalf of Angola by that country’s ambassador to Seychelles, Sandro Renato Agostinho de Oliveira.

Minister Radegonde said “it is appropriate that, just after the end of Africa Month, Seychelles and Angola meet in Victoria to give yet more meaning and substance to the objectives of our pan-African organisation. The two agreements that we have just signed are fully in keeping with these objectives, and with our mutual desire to promote the unity and solidarity between Seychelles and Angola, and to coordinate and intensify our cooperation and efforts to achieve a better life for our two peoples”.

Minister Radegonde also noted that these agreements are not just legal frameworks defining broad terms and modalities of potential areas of cooperation. “They embody not just our shared recognition of values, such as democracy, freedom and rule of law, but they will serve in ensuring and guiding the existing relations and our future exchanges. They reflect the high level of trust between our two states and the spirit of genuine strategic partnership between Seychelles and Angola that characterises our bilateral relations. The agreements underpin our will and efforts to expand bilateral cooperation in several key areas. They will also provide for the agencies concerned to undertake direct dialogue and consultations regarding the main cooperation aspects of our decades-long relations.”

The newly accredited ambassador de Oliveira also described the signing of the documents as “opening a new chapter in the history of our cooperation. Effective cooperation can only be achieved when there exists a legal and institutional framework. The implementation of these two important instruments will accelerate the exploration of areas for a mutually beneficial cooperation and the materialisation of joint projects, aimed at the sustainable development of our respective economies and the well-being of our populations”.

The Angolan ambassador stated that Angola and Seychelles are long-time allied partners, sharing common interests and visions in various matters of regional and international ambit, a result of which they maintain an excellent cooperation in the multilateral field, particularly in the sphere of the Southern African Development Community (SADC) and the African Union (AU).

“The moment is now ideal for us to give a new dynamic to the bilateral relations, taking maximum advantage of the opportunities that exist in the two economies in various domains, in the pursuit of reciprocal advantages that will support the development of our countries and the fulfilment of the wishes of our populations. On the other hand, the value of an agreement is judged only by the result of its implementation. We have faith that the political will and institutional collaboration that has guided us to this historic moment will serve as sufficient vigour for the full implementation of the agreements and consequently increase significantly the exchanges between Angola and Seychelles in various sectors.”

In conclusion, both the minister and the ambassador made an appeal for the business people of both countries to explore the existent business and investment opportunities, as they are the main catalysers of trade exchanges between the two nations.

Among the sectors that both Seychelles and Angola have jointly identified so far are: tourism, agriculture, education, health, culture, information and communication technology, construction industries, trade, investment and financial services.

The small ceremony was also attended by the principal secretary for Foreign Affairs, Ambassador Vivianne FockTave and other officials from the department of Foreign Affairs and the Angolan delegation.