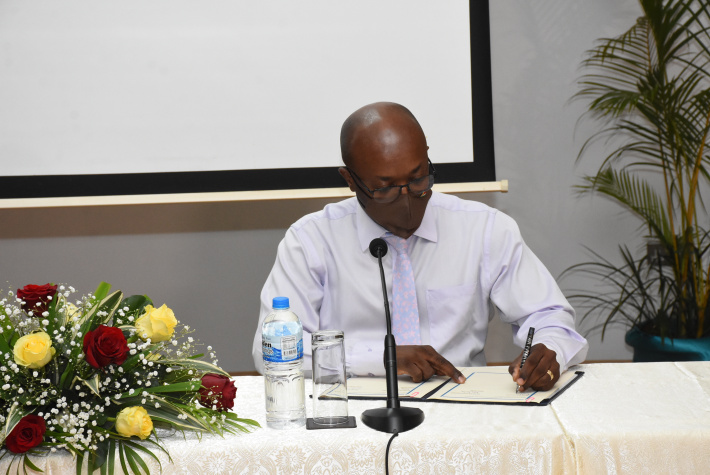 Minister Valentin signing the agreement which officially establishes IECD as a category 2 centre under the auspices of Unesco (Photo: Thomas Meriton)

The agreement, which officially established IECD as a category 2 centre under the auspices of Unesco, was signed yesterday afternoon by the Minister for Education, Dr Justin Valentin – coinciding with the national Children’s Day.

The agreement has already been signed by the director general of the Unesco, Audrey Azoulay, in April 2021 at the Unesco headquarters in Paris, France. It entered into force as of yesterday, June 1, 2021.

The geographical scope of the United Nations Educational, Scientific and Cultural Organisation (Unesco) Category 2 Institute means that IECD has acceded to a global recognition as a leader in this field.

This is over and above the recognition as Best Practice Hub for early childhood development and education which IECD received in 2017.

With a total of 18 defining articles, IECD’s agreement with Unesco means that the institute will become an extension of the Unesco.

As a category 2 centre for early childhood, IECD is able to mention of its affiliation with Unesco as ‘under the auspices of the Unesco’ and is authorised to use the Unesco logo alongside its own in letterheads, electronic documents and web pages.

The agreement is valid for a period of six years as from entry into force with clauses which allows for revision of the agreement.

“Under the agreement, IECD has gained additional functions where we can now also operate on an international level. We have transformed from a local institute to an international centre for early childhood so our outlook is not only local but regional, on the African continent and even further,” explained the chief executive of IECD, Mrs Choppy.

IECD will be able to exchange and share with other countries and even train persons outside of the Seychelles in regards to best practices and standards in early childhood care and development.

However the institute will have to amend its law which currently only makes provisions for its local operations and mandate, Mrs Choppy stated.

Mrs Choppy noted that the new Minister for Education, Dr Valentin, is pushing for IECD to rise even further to become a Unesco category 1 centre for early childhood sometimes in the next 10 years.

While a Category 2 centre works at arm’s length with the Unesco, a Category 1 centre is funded directly by the Unesco.

At present, articles one and two of the agreement commits the government to take in the course of the year 2020-2021 any measures required for the transformation of IECD into a Category 2 centre under the auspices of Unesco.

Thanks to funding promised by the United Arab Emirates government, IECD is working to construct its building at Ile du Port where its Category 2 centre will be housed.

Article four and five of the agreement notes that the institute shall be independent of the Unesco and receive functional autonomy from the Seychelles government for the execution of its activities.

Aside from IECD’s national board which is presently chaired by Captain Savy, the agreement makes provisions for a governing board that will guide and oversee IECD.

In his closing remarks, Captain Savy highlighted the importance of such a designation, especially considering there are about only 15 Category 2 centres for early childhood in the world. 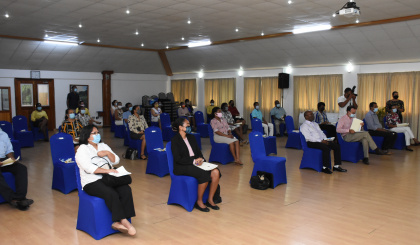