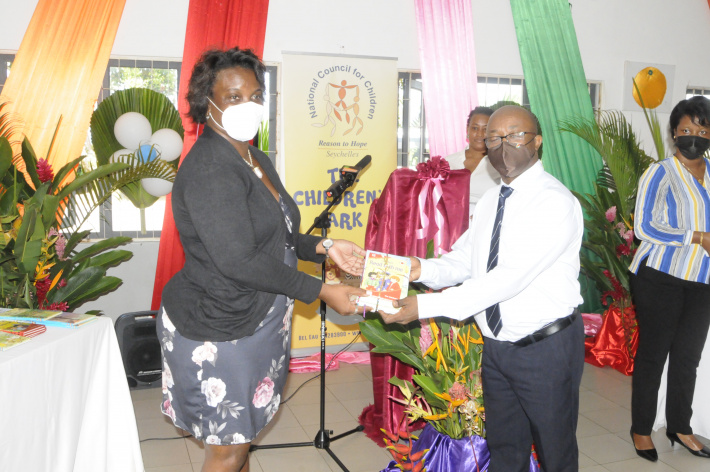 The handover of the donation (Photo: Louis Toussaint)

“A child who reads will be an adult who thinks” was the message expressed by the Minister for Education yesterday as he and his ministry donated a set of books to the President's Village that will benefit both primary and secondary students.

The set which comprises story books and study guides was given in a special ceremony attended by the Minister for Youth, Sports and Family, Marie-Celine Zialor, chief executive of the National Council for Children Yasmin Umarji, residents of the home as well as representatives of both ministries.

In his address Minister Valentin said the Ministry of Education is delighted to present to the village some good reading materials as his ministry believes in quality education.

He noted that the donation was made specifically to embellish the library of the home and add a few educational books as well as literature books.

“We are working to improve the quality of education at all levels. We want to embellish the libraries not only in this home but throughout the community,” said the minister.

The minister said records show that there has not been a student from the home who have qualified for the IGCSE exams in a while and he hopes that the books will help guide and inspire them to do better in their education so that they may qualify for the exams.

“We want kids in the home to have a chance to qualify for the IGCSE as your social background should not define the type of education you have,” said Minister Valentin.

The minister continued by adding that kids in homes have the same ability as everyone else; they might be in a ‘home’ but that does not mean that they cannot have a dream and a goal and work towards it.

He added that the Ministry of Education and the Ministry for Family are working closely to make sure that every child succeeds in their education, by incorporating after-school learning for kids who may have difficulties in certain subjects.

On her part Minister Zialor said that kids need to immerse themselves in books and allow themselves to dream.

Following the ceremony the ministers along with their delegation visited the grounds of the home. 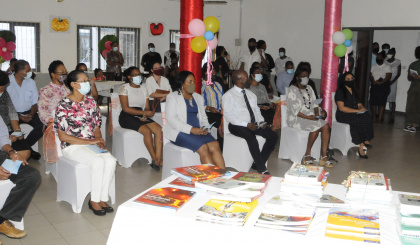