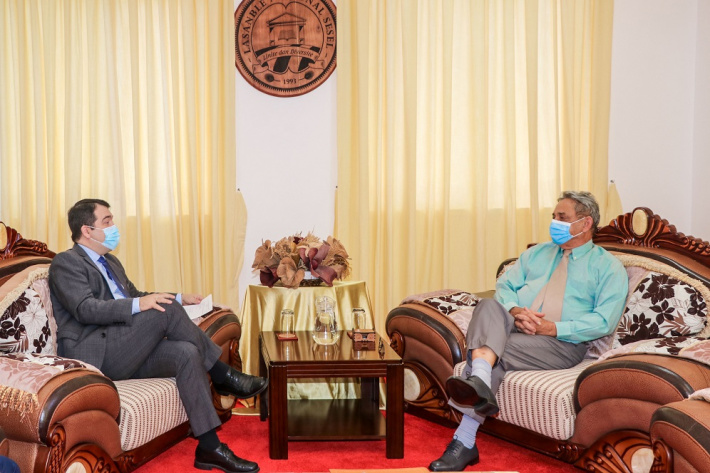 The Ambassador of the Russian Federation to the Republic of Seychelles, Artem Alexandrovich Kozhin, paid a courtesy call on the Speaker of the National Assembly, Hon. Roger Mancienne, yesterday afternoon.

Speaker Mancienne was accompanied by the deputy Speaker, Hon. Gervais Henrie and the chairperson of the International Affairs Committee, Hon. Waven William.

Speaker Mancienne welcomed the ambassador and Mr Kozhin expressed his sincerest congratulations to the Speaker on his election as the Speaker to the 7th Assembly.

The ambassador mentioned that Seychelles will this year be celebrating 45 years of unwavering bilateral relations with Russia. Both the Ambassador and Speaker Mancienne noted that this is a great milestone and they wish that the bond between the two countries strengthens further.

The ambassador reassured the Speaker that Russia remains committed and willing to assist Seychelles in its growth and development.

Before the meeting concluded, Ambassador Kozhin passed on a letter from the Speaker of the Upper House of the Russian parliament congratulating Speaker Mancienne on his new role.

The Speaker greatly appreciated this gesture and expressed his honest gratitude.

Also present for the meeting was Maxim Matasov, the first secretary at the Russian embassy in Seychelles.

Government reassumes management of cemeteries on Mahé and Praslin |04.06.2021