This year’s theme for Africa Day is: ‘The psychological impact of colonialism on a small island nation that differentiates itself from the African mainland’. On behalf of the National Museum of History, TONY MATHIOT explains how Seychelles fared during the days of Empire.

So, is Seychelles “burdened with a colonial past?” Do we have anything to accuse, condemn or reproach the colonial government with? And moreover, who actually colonised us? Let’s see.

Our archipelago was named séchelles in 1756 the year that the French took possession of our uninhabited islands in honour of Viscount Jean Moreau de séchelles (1690-1761) the Finance Minister in the court of Louis XV. That same year, our main island was named Mahé after Bertrand François Mahé de Labourdonnais (1699-1753) the Governor- General of Ile de France (Mauritius).

Our capital town was renamed Victoria in honour of Queen Victoria Alexandrina (1819-1901). Seychelles capitulated to the British on April 21, 1811 and the 1814 Treaty of Paris accorded the British official ownership of the Seychelles along with Mauritius. Thus began the British occupation of Seychelles which would be ruled as a Dependency of Mauritius from 1814 to 1903. When the Union Jack was unfurled on Seychelles soil, the population stood at 4,000 inhabitants, most of whom were African slaves brought to Seychelles by French settlers and French slaves traders. It must be noted that although an 1807 act of Parliament had outlawed slave trade in all British colonies, and Seychelles had capitulated to the British for the first time in 1794, slaves from Africa and Madagascar kept arriving on our shores by the scores. This was because the lack of British presence in our part of the Indian Ocean meant that those engaged in this illicit lucrative trade could persist with impunity. Anyhow, slavery is a constant leitmotif in the historiography of Seychelles because slave labour created the foundation of our agricultural economy during both the French and the British periods. It redounds to the integrity of the colonial government that it respected Article 3 of the 1794 capitulation Treaty which stipulated that “Les propriétés des habitants seront respectées: il ne leur sera causé aucun trouble ni dommage dans leurs biens, meubles, immeubles, esclaves et dans leur personne, en aucune manière”

Therefore, the land concessions that the Malavois Laws of 1797 had introduced to encourage French immigrants from Ile Bourbon and Ile de France to come and settle in Seychelles were not expropriated.

One can legitimately assume that the British inherited nothing much from the French when they assumed control of the Seychelles. L’Etablissement was a small agglomeration of dilapidated buildings and dwellings of timber. The inhabitants were engaged in fishing and agriculture. Coconut oil production was progressing rapidly and cotton which had been the first export crop in 1796 was the principal product with increasing acreage of land allocated for its cultivation. As of February 1, 1835, the Abolition of slavery was implemented in all British Colonies. In Seychelles, 6,251 slaves found freedom from a total population of 7,500 inhabitants – and all slave owners received compensation for the loss of their slaves.

An overview of British colonisation in Seychelles lays bare the fact that it was completely different from what it was in mainland Africa, in Kenya for example, or Uganda. In Kenya, colonisation perpetrated cultural displacement, economic exploitation and racial hierarchy. Ethnic groups like the kikuyu were expropriated of their land by British settlers who exploited the indigenous population as labour on their plantation estates. Elsewhere, like in Ghana where there was armed resistance against British rule, tribal chiefs were deposed and exiled to our shores. King Prempeh of Ashanti in 1900, Mwanga ruler of Buganda and King Kabarega of Bunyoro in 1901. There, the British used traditional chiefdoms to execute their strategies of divide and rule. The natives were subjugated by the imposition of various obnoxious laws and regulations.

Isn’t it absolutely obscene that Africans were prohibited from cultivating high value cash crops like coffee? Coffee was grown by white settlers only with African labour until the early 1960s, after the Mau Mau rebellion had made it chillingly clear that Africans would not remain passively submissive to any more dehumanization treatment on their own sovereign territory. Such was the wicked agenda of the settler societies that materials produced by Africans were not used by industries locally but abroad. This disarticulation of the economy meant that Africans could not have control on their own African products, whereas in Seychelles, we produced for local consumption as well as for the export market. Seychellois landowners didn’t need to abide by any restrictive agrarian policies, even those who had a lease on Crown Lands. As a matter of fact it must be acknowledged that the British colonialists were kind to our farmers. During his last year in Seychelles, Governor Ernest Bickham-Sweet Escott (1857-1941) enacted an ordinance (No 4 of 1904) “to authorize the loan to planters of a sum not exceeding one hundred thousand rupees from the surplus balance of the colony”.

From 1861 to 1874 close to 3,000 African slaves were rescued from Arab dhows and brought to Mahé. The male and female adult slaves were employed as plantation workers or as domestic servants while the children were taken to Venn’s Town, the mission institution that a branch of the Anglican Church, the Christian Missionary Society established in 1875.

In 1903 when Seychelles separated from Mauritius to be administered as a colony with its own Governor and Executive Council, the population was 19,000 inhabitants. The demography of the population had changed dramatically from what it had been in 1811. Miscegenation among the descendants of the African slaves and the white settlers was such that it was virtually impossible to categorize the average Seychellois by race. The first decades of the 20th century was a period of gradual development and progress. There were mission schools in all districts and a good albeit very old hospital in Victoria (St John of God hospital 1875). The colonial government enacted various laws for the good of the colony. In 1903, a total of 36 ordinances were passed in the Legislative Council. These legislations were implemented to safeguard the welfare of inhabitants, to preserve the natural resources of the country, to create revenue for the colony and to provide education for the people. It’s not surprising that most people in Seychelles were not aware that they were ‘his Majesty’s subjects’ or ‘his obedient servant’. Few would have been able to know that a completely different scenario was enfolding in British territories in Africa where sweat and blood flowed under the whip of colonization and which would provoke the formation of the Organisation of African Unity (OAU) many decades later on May 25, 1963.

During the First World War (1914-1918) and the Second World War (1939-1945) a few hundred Seychellois men sacrificed their lives for the glory of the Empire. A cenotaph and 46 marked graves in the Mont Fleuri cemetery attest to this great patriotic sacrifice.

There was poverty. Abject poverty even. But this did not arise from a system of social inequality created by the colonial government. It was a feature of misfortune that was then and is still common throughout the world – it was like it is called, “one’s lot in life”.

It was during the period of the First World War that poverty in the colony seemed to have reached its acme, mainly because of widespread unemployment. Consequently, 2,450 persons were prosecuted for praedial larceny of whom 1,338 persons were incarcerated. Immediately upon his arrival in the colony in 1918 Governor Sir Eustace Edward Twistleton–Wykeham Fiennes (1864-1943) was so much appalled by the conditions of the completely destitute that he established a home for them which became known as Fiennes’s Institute. The plight of the poor was a concern to every governor. By the 1950s, food, rent and clothes were given to the poor by the Public Assistance Committee. The Seychelles ex-servicemen Fund provided relief for ex-servicemen who through illness and infirmity were incapable of earning a living and for widows of ex-servicemen in distress. There was the Samaritan Fund which provided care for patients who had been discharged from hospital. The school meals centre provided free meals to school children of Victoria. Conditions of employment and recruitment for labour was regulated by legislation so that men and women labourers would not be exploited.

It is worth knowing that a few of our governors were appointed to serve in British Colonies in Africa after completing their tenure here.

One cannot help but wonder what psychological impact it must have had on them after having administrated a relatively pacific and prosperous colony where they didn’t have to worry about their personal safety?!

Sir Joseph Aloysius Byrne (1874-1942) who was Governor from 1922-1927 was appointed to serve in Kenya from 1931-1936. Sir Frederick Crawford (1906-1978) who was Governor from 1951-1953 became Deputy Governor of Kenya 1953-1957 and later Governor of Uganda from 1957 to 1961. Some had been through their African experience before coming here. Sir Hugh Selby Norman Walker (1916-1985) who was Governor from 1967 to 1969 had been appointed Commissioner of Bechuanaland (Botswana) in 1965, and Sir John Thorpe (1912-1961) had served in the Colonial Office in Kenya from 1935 to 1953 before he was posted in Seychelles in 1958. Indeed, there was a vast difference between the modus operandi of the British Colonial Government in Africa and that of the small island colonies like the Seychelles. One is compelled to believe that it must have been a question of geography, demography and natural resources that determined what stance the British colonies would take against the indigenous population of their Majesty’s protectorate, dominions or colony. Therefore, the psychological impact of colonialism on each nation would be different. Kenya is 224 960 sq. mi, and by great contrast Seychelles is 171 sq. mi. Of course, Great Britain took possession of Mauritius (1810) and Seychelles (1811) at a time when Imperial rivalries and territorial expansionism set the World Order. Political expediency was not a factor. Slave trade and slavery played a fundamental role in the expanding scope of the world. In many parts of Africa, colonialists found a hostile environment where tribal warfare, Islamic theocracies vast wilderness and revolt against their presence made their conquest difficult. No. Seychelles was never ‘under the yoke’ of colonialism. It’s not true. We lived fairly well, we evolved and we learned and gratefully accepted the modern amenities of the 20th century that brought our lives on a par with other developing Colonies (the Carnegie Public Library 1910, Seychelles hospital 1924, Seychelles College 1948, Regina Mundi Convent School 1953, Rochon Dam 1969, and an international airport 1971)

The desire for independence from Great Britain did not sprout from political upheavals but rather from constitutional developments that gradually brought the two main political parties SPUP (Seychelles People’s United Party) and SDP (Seychelles Democratic Party) into a coalition government that would unfurl the Seychelles Republican flag on June 29, 1976. In 1964 when the first cries for independence echoed across Gordon Square, the British Empire was petering out. Many British colonies in East Africa were singing their own national anthems – Nigeria 1960, Uganda 1962, Tanzania 1961, Kenya 1964 and Malawi 1964….

Today, the population of Africa stands at 1,368,288,109 people of which we account for some 98,000 people. What psychological impact have colonialism had on us? What is the answer? 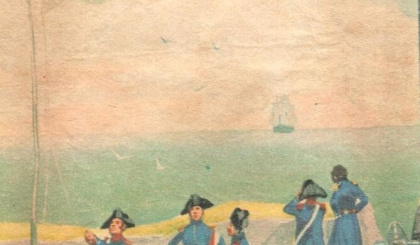 The capitulation of Seychelles to the British on May 14, 1794 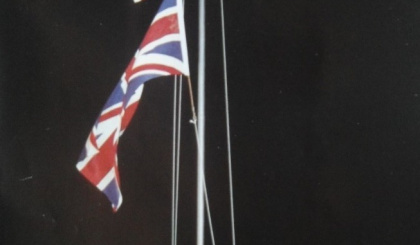