An exhibition under the theme ‘The Youth of the Earth’ based on documentary portraits of teenagers undergoing the transition of childhood into adulthood was launched on Monday afternoon in the lobby of the International Conference Centre Seychelles.

Twelve young male and female adolescents from secondary schools, post-secondary institutions and others from around the country are part of an ongoing seven-year research focused on what goes on in young people’s mind as they experience their first love, first challenges and first encounters with the real world. Russian professional photographer, Eva Vradiy captured the young people’s eyes and facial expressions to show their emotions.

Accompanied by a documented video, the portrait exhibition of the 12 young Seychellois along with portraits of 12 young adolescents from Crimea, Russia, forms part of a seven-year visual study by Mrs Vradiy on ethnicity and national features, focusing of commonalities that exist between adolescents around the world, despite differences in appearance. Mrs Vradiy’s artistic work will be on display until tomorrow in the hall of the Mont Fleuri secondary school as from 9am.

With 14 years’ experience as a photographer, 35-year-old Vradiy started the project three years ago in her home town of Crimea and Seychelles is the second chapter of her study. But why Seychelles?

“My husband is a doctor and he travels over the world as part of his duties. He is currently working here at the Seychelles Hospital and I followed him here. I got inspired to continue with my project here in Seychelles through the various unique expressions I see on the faces of young people when I travel by bus,” said Mrs Vradiy.

She added: “Seychelles has three distinct ethnics, cultures and backgrounds and I found it interesting to investigate these diverse ethnicities in the adolescents and to document their features through the lens of a camera.”

Mrs Vradiy further said viewers to the exhibition will be able to immerse themselves fully in the world of the young heroes from two completely different countries, backgrounds, mentalities, ethnic groups, and types of physical appearance.

“Independently they will have a chance to uncover and discover the unifying human principles which are adherent in all people on our planet,” she added.

Mrs Vradiy noted that her conclusion on the two sets of youths is that despite the differences in culture, social and ethnic characteristics, they are quite similar, holding unifying principles: namely love, desires, fears, dreams and ideals, which though not visible on the surface they are hidden inside them. She said that as the teenagers themselves represent a kind of bridge between childhood and maturity, how they enter the world of adulthood depends a lot on the more experienced adult.

“My message is that we give them our hand and hold them carefully while they are crossing this bridge. This can happen in many ways – by valuing their uniqueness, respecting their borders, and encouraging their directness and more, let’s allow them to understand clearly their own choices, and their desired freedom are nothing else but the responsibility for decisions which they have taken,” she said.

Launching the photographic exhibition, the principal secretary for tertiary education and human resources development, Linda Barallon, said what is seen in the eyes of the project’s participants is a reflection of the future of any country.

“Therefore such interaction is aimed at provoking the viewers’ contemplation on the importance of investment into society’s most valuable asset – the youth,” she said, noting that investing in young people’s education, health and employment will ensure better prospect for their own lives and for their countries’ development.

Mrs Barallon called on parents, government, nations and non-governmental organisations to promote dialogue and understanding across cultures and generation in order to advance the development of the youth.

The young people photographed in the exhibition said they were taken aback and surprised when approached by Mrs Vradiy for their photos to be taken. They all said they willingly accepted to be part of her project given its uniqueness – to express their feelings which will go worldwide.

“I was in class and she just came in and started picking students and I was one of those chosen. It was really unexpected as I didn’t know I would get such an opportunity to express myself for the world to see. It was a lifetime experience and I accepted it,” said 18-year-old Maybelle Rosalie from the School of Business Studies and Accounting (SBSA).

“I got in touch with her through my girlfriend. I was told she wanted to take my photo for a project and when I learned about of the project I opted to get onboard and give my expression as a youth living in Seychelles,” said 19-year-old Samuel Dubel, a boatman from Beau Vallon.

Mrs Vradiy who has lived here for one year, took photographs of her models in February. She is expected to live the country to continue with her project in another country, probably China where her husband is planning to go next.

The accompanying photos taken by Thomas Meriton show some of the guests viewing the exhibition. 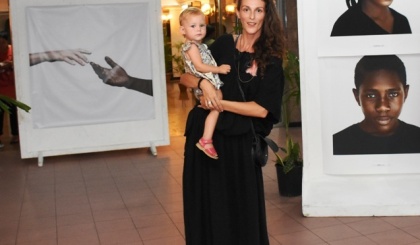 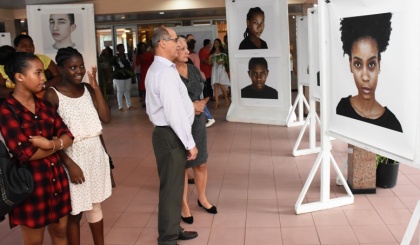 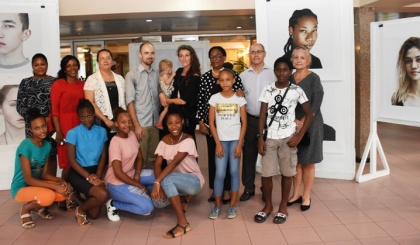