Are the giant tortoises born on Necker Island the first from Aldabra?   |24 May 2021 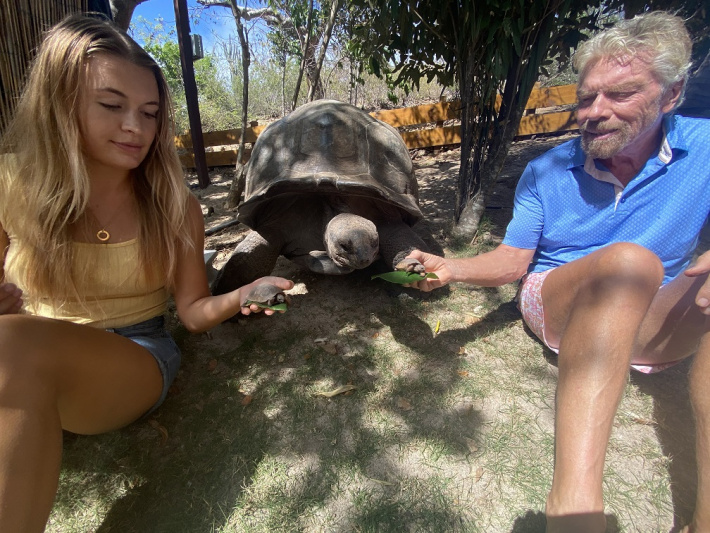 Mr Branson and Emily with the two baby giant tortoises

Two giant tortoise hatchlings were born on Necker Island and are believed to be the first Aldabra giant tortoises bred naturally anywhere in the world outside of the Aldabra Atoll.

“The two hatchlings are doing very well and already exploring the island,” Branson said in a statement reported fox23.com.

The tortoises have an average lifespan of about 100 years and can live up to 250 years.

“It is believed that tortoises are the longest-lived of all animals, although is hard to prove because they have outlived the scientists who were studying them, and proper records were not kept,” according to the National Zoo of Necker Island.

Giant tortoises have roamed the island for many years, but this is the first time they have successfully bred there. Eggs in a clutch laid a few years ago failed to hatch. The tortoises can lay nine to 25 eggs in each clutch with only three to five viable young produced, according to the National Zoo. Depending on population density, they can nest several times a year.

“Because they nest a few times a year, we hope to see many more baby giant tortoises in the coming months and years,” Branson said.

Emily, an eagle-eyed member of the Virgin Limited Edition team on Necker Island, came across the first hatchling not long after it emerged from its nest. When she spotted it, she cleverly realised it had different markings than the other tortoises that live on Necker. A second baby was soon found by Kami and Scott.

The island’s animal conservation team, led by Vaman, was brought in to ensure the health and safety of the precious babies.

“The two hatchlings are doing very well and already exploring the island. I’m sure they will be welcomed by the huge array of wildlife who call Necker home, from other breeds of tortoise to lemurs to flamingos to iguanas to miniature horses. I’ll be sure to share more photos and keep you updated on their progress,” added Brandon.