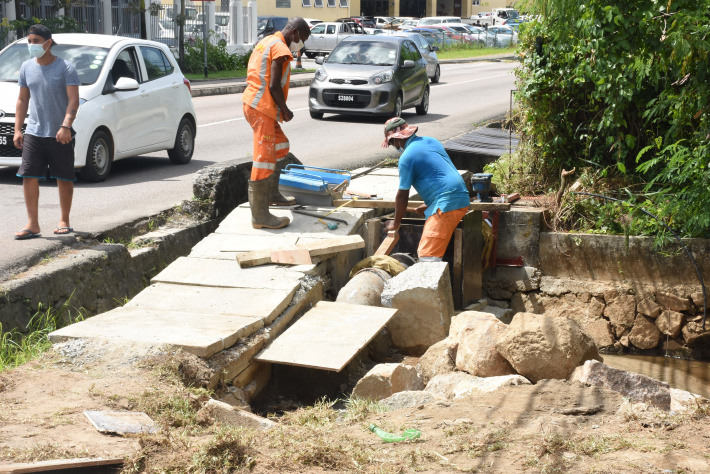 Residents of Cascade and Pointe Larue have been experiencing frequent water interruptions throughout this week due to several burst pipe incidents, the Public Utilities Corporation (PUC) yesterday clarified.

The first incident occurred opposite the Seychelles International Airport early this week when the water pipe’s support gave way due to the heavy rainfall in recent weeks.

Ibrahima Diallo, general manger for water at PUC, explained that PUC worked to repair the leaks on Tuesday May 18 and had planned to reinforce the water pipe support on Wednesday May 19.

However another incident occurred on the same water line, this time near the playground at the Pointe Larue schools where a water pipe coupling came off due to the dislodging of the first water pipe at the airport. This was promptly fixed on the same day Wednesday May 19.

The third water pipe burst in the region happened yesterday morning, May 21, near the Seychelles Police Academy (SPA). This water pipe was in the process of being repaired when our newspaper arrived on site midday yesterday.

PUC engineers were also working to reinforce the support of the airport’s water pipe yesterday.

“In order to repair these pipes, PUC had to place water restrictions otherwise we would not have been able to fix the leaks,” explained Mr Diallo.

“We do not expect this situation to continue but we would also like to stress that the section of pipe from the airport to the playing field at Anse Aux Pins is an old pipe which is due to be replaced,” added Mr Diallo.

As part of its long-term plan, PUC is hoping to raise funds to finance the replacement of this section of pipe.

Meanwhile PUC urges its customers to install water tanks at their homes to ensure they are not as severely affected by water interruptions either during drought seasons or instances such as these.

The accompanying photos show work in progress to repair the burst pipes. 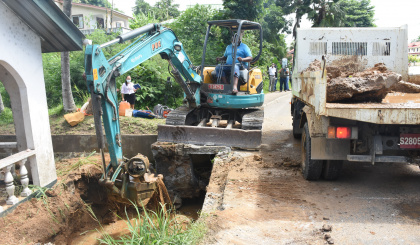