Ministry of Youth, Sports and Family gets new theme song |21 May 2021 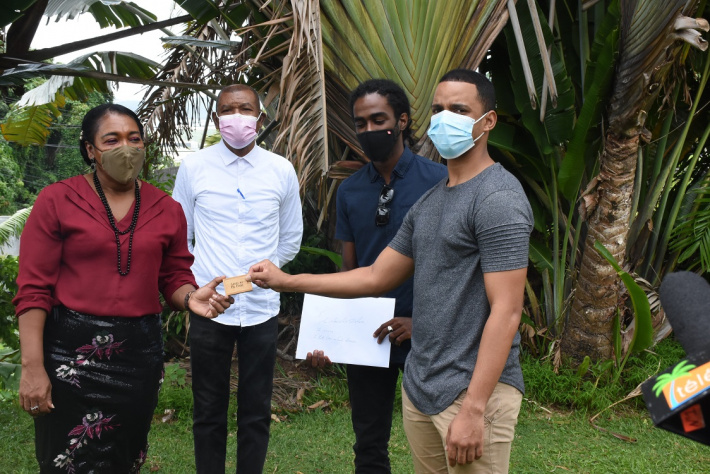 Aaron hands over the USB to Minister Zialor in the presence of Patrick Victor and Isham (Photo: Louis Toussaint)

The Ministry of Youth, Sports and Family has endorsed the song ‘Lekel Ki Pare’ – composed by musician, composer and songwriter Patrick Victor and sang by various local artists – as its theme song.

The song, to be used as the ministry’s anthem at organised events, was handed over on USB to Minister Marie Céline Zialor by the producer and participating artist Aaron Jean in a small ceremony held yesterday morning at the ministry’s headquarters, Family House, Bel Eau.

Present were the composer of the song, Ambassador Patrick Victor, Isham (participating artist ) and staff of the ministry.

The song was first aired on ‘Radyo Sesel’ on Saturday May 15, 2021 on the occasion of the International Day of the Family. A video clip of the song was also premiered on the early morning television show ‘Bonzour Sesel’ on Wednesday May 19, 2021.  Apart from Aaron and Isham, the other mostly young local artists participating in the song are Vicky, Shannon, Auspicious, Trevor Bristol, Fastidious, Mia, Shana Damoo, Kelly Mathiot and Tyra.

On behalf of her ministry, Minister Zialor thanked Ambassador Victor, Aaron and Isham and the other young artists for their contribution.

She said the song from the artists shows that different forms of art can be used to pass on positive messages to the families.

Minister Zialor said she hopes that other young people who listen to the song will see the ‘hope’ and motivation that will get them to participate in the capacity development of the country.

She also mentioned that apart from sports, the arts also brings emotions and good out of people and that she appreciates the initiative of Ambassador Victor to bring along a group of young people together to make the song to bring out the emotions and good.

According to Ambassador Victor, the song, containing twelve verses and which had been in his collection for quite some time, is about ‘hope’ following challenges faced by different strata of society.

He said the idea behind the song is to inspire people to be ready and prepared to do something for oneself and also for the country, especially in this challenging time of the pandemic.

Ambassador Victor said he chose to let the young people (artists) to pass on the ‘hope’ message to the society and hopes that people appreciate the song.

He also said that he had no difficulty in choosing the twelve young artists to sing the song as he had been following their musical journey all along.

He said that he did not interfere with Aaron’s work in producing the song at his (Ambassador Victor’s) studio which took around two and a half weeks to complete.

He also said that he was very happy with the outcome of Aaron’s work, noting that young people should be given the confidence and opportunity to take on responsibility.

As for Aaron, he said that with just the mention of Patrick Victor’s name, the task was heavy on the shoulder. He added that he must have done something out of the ordinary which had attracted the attention of Ambassador Victor to let him take charge of the production of the song with which he (Aaron) is very satisfied. He stated that the song will surely inspire people to make a difference in their lives and for the country.

On his part Isham said that he also was very happy to have participated in a song written by one of Seychelles’ most prominent artists. He hailed Ambassador Victor for once again, as he invariably does, having something of quality in store which can touch the Seychellois audience.