Seychelles will play in group B at the tournament in Saly, Senegal

Seychelles get ready for second appearance

Coach Don Anacoura is confident his Seychelles team can put on a good display as they make a second appearance at the Confederation of African Football Beach Soccer Africa Cup of Nations slated for the city of Saly, Senegal from May 23-29.

The competition will act as the qualifier to the Fédération Internationale de Football Association (Fifa) Beach Soccer World Cup 2021, which will be played in Russia in August 2021. Africa will be represented by the Confederation of African Football (Caf) Beach Soccer Africa Cup of Nations winners and runners-up.

Seychelles qualified for the final phase of the tournament after Madagascar withdrew their participation in the qualifiers last month.

Coach Anacoura’s team have been drawn in group B alongside big guns Morocco, Egypt and Mozambique.

Not only Seychelles qualified by default. The Democratic Republic of the Congo, Morocco and Uganda all went through after their opponents ‒ Ivory Coast, Lybia and Ghana ‒ withdrew due to Covid-19.

This means that out of the six qualifying matches, only two were played, with Mozambique beating the Comoros 17-8 on aggregate and Tanzania collecting a 12-9 win on aggregate against Burundi. Hosts and defending champions Senegal and Egypt had already qualified.

The Pharaohs of Egypt qualified automatically to the finals as the highest-ranked entrant based on the results of the previous competition.

Despite never lifting the trophy, Egypt are the team who have taken part the most in the tournament with 10 appearances and finished third on four occasions.

Morocco have eight appearances to their name and finished third once in 2013, while Mozambique will be making their fourth appearance.

The eight qualified teams will play in two groups of four with the top two teams securing their spots in the semifinals. The remaining four teams will battle in the fifth-eighth place play-offs.

Seychelles’ first game is against Morocco, followed by Egypt and Mozambique.

Coach Anacoura, who captained the country’s 11-a-side team to winning the gold medal at the 10th Indian Ocean Islands Games in 2011 on home soil, is happy his beach soccer protégés will be leaving early for Senegal where they will get to play two friendly matches.

The team are expected to leave on Saturday on a regular Ethiopian Airways flight for Senegal.

“We are thankful to the Senegalese who have agreed to play these two friendly matches ahead of the start of the competition.

“These two friendly matches will allow us the coaching staff to try different playing strategies and formation as we have had very little time to train as a team. We will also use these matches to see how the players gel together and how they play as a team.

Despite the little time training as a team, the players have been working a lot individually and we have some very talented players. I am sure they can give a very good show in Saly,” coach Anacoura told Sports NATION.

As for Seychelles Football Federation (SFF) secretary general George Bibi, he said: “We are grateful to the host country who will be taking care of all the costs of the Seychelles team since they will be arriving in Senegal earlier than scheduled.”

The tournament was due to take place in Jinja, Uganda from November 23-29, 2020, but due to the Covid-19 pandemic and rising water levels on the shores of Lake Victoria affecting the host beach, Uganda withdrew from hosting. Senegal were subsequently chosen as the new hosts.

It is to note that Seychelles first took part in the tournament in 2015 when it played hosts and finished last out of eight teams without a single win and Madagascar were crowned the kings of African beach soccer after beating 2013 champions and early favourites Senegal in an exciting penalty shootout after the score remained locked at 1-1.

Seychelles lost their group matches 1-10 to Nigeria, 1-2 to Ivory Coast and 2-5 to Egypt before going down 1-12 to Ghana in the seventh place play-off match.

The tournament has been running since 2006 and Egypt has the most appearances at the tournament, with 10 appearances. The Pharaohs have attended every cup since its inception, while Senegal lead in terms of victories with five and have qualified for the World Cup seven times. Nigeria have been to the World Cup six times.

Seychelles will be represented by 14 players in Senegal:

The eight teams who have qualified for the final tournament 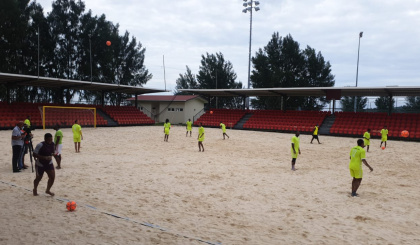 The Seychelles team players during a training session yesterday