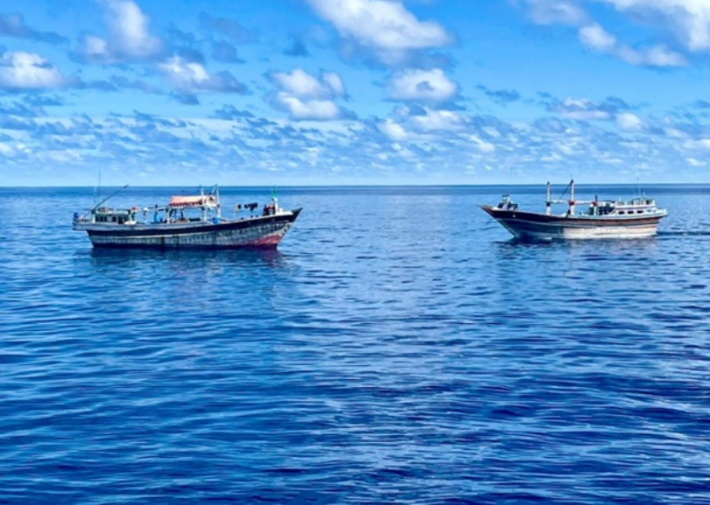 The two dhows that have been intercepted

The Seychelles Coastguard (SCG) has intercepted two dhows suspected to have been fishing illegally in Seychelles’ Exclusive Economic Zone (EEZ).

The two fishing dhows were spotted in Seychelles’ EEZ on Tuesday this week during a routine patrol by the Seychelles Air Force aircraft.

The information was passed on to the National Information Sharing and Coordination Centre (NISCC) for coordination with the SCG of the Seychelles People’s Defence Forces (SPDF).

Two SCG patrol vessels – PS Topaz and PS Etoile – were deployed and the two dhows were intercepted around 180nm North West of Mahé.

According to a joint communiqué from the SPDF and the police, the two dhows are suspected of having been involved in illegal fishing inside Seychelles’ EEZ.

The two dhows are now being escorted closer to Mahé for further investigation by Seychelles authorities.

Officers of relevant authorities have boarded the two vessels to carry out their investigation.

Public health guidelines and protocol will be observed and adhered to by the officers involved in the boarding and conduct of investigation on board the said vessels.