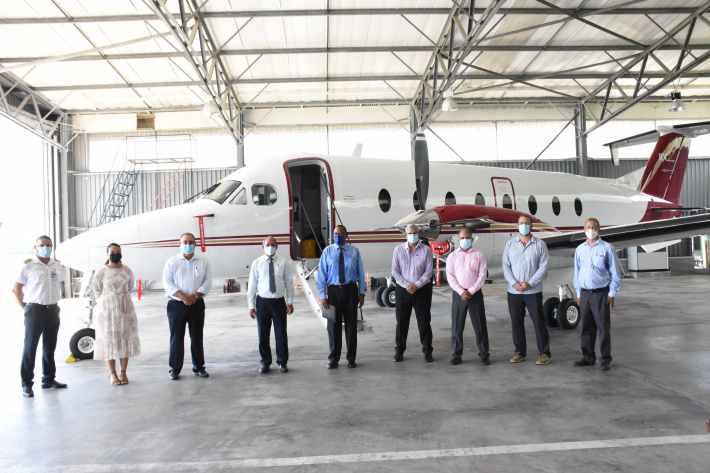 A third 19-seater Beechcraft airplane worth US $2.8 million has been added to the Islands Development Company’s fleet of aero planes.

S7 Alphonse, the new Beechcraft 1900D which arrived in the country late April from South Africa, was delivered to the Islands Development Company (IDC) in a special ceremony on Friday morning at the IDC Aviation hangar at Point Larue.

Speaking after the ceremony, Mr Savy said the S7 Alphonse was bought in the United States of America (USA). Following an upgrading maintenance of its cockpit, mechanical system in the USA and further upgrading of the interior and painting of the aircraft with the IDC aviation colours in South Africa, among other freight charges, the total cost of the aircraft was around US $3 million, which has been borrowed from the Al- Salaam Bank.

“I can tell you that when the Ile Platte hotel project is completed, our fleet of aircrafts will not be enough,” said Mr Savy, noting that with a fleet of the same type of aircrafts minimises expenses on maintenance and training among others.

He said the only disappointment faced by the IDC Aviation was losing its 100% Seychellois employee status after losing some of its pilots to Air Seychelles and as a result, IDC was forced to recruit foreign pilots. He stated that as a challenge, the IDC Aviation is working to regain its 100% Seychellois pilot team in the years to come. At the moment there are five Seychellois and five expatriate pilots among the 60 employees of IDC Aviation. He thanked his staff and partners for helping in making IDC Aviation what it is today. He claimed that although the loan with the Al- Salaam Bank is for five years, IDC will be able to repay in three years maximum in view of the economic activities happening on the islands.

The Beechcraft 1900D is a pressurised twin-engine turboprop fixed aircraft and has the capacity to carry 19 passengers and cargo. It is certified to fly up to an altitude of 25,000 feet (7,600m) above sea level and is designed to carry passengers in all weather conditions from airports to short runways. It also has the capability to fly regionally.

In his speech to mark the occasion, Minister Derjacques said the new Beechcraft marks another milestone in IDC’s development.

“This shows that there is a thirst to continuously improve connectivity between our islands as well as our country to the world,” Minister Derjacques said, noting that IDC has been a significant contributor to the economy and foreign exchange earner.

Minister Derjacques stated that the Ministry of Transport is currently working on several policies including the National Aviation Policy which will liberalise, guide, and structure the aviation industry of the country, also ensuring that safety and security remain the primary factor and focus.

“Hence, the importance of domestic transportation and its link to the country’s economic development which should not be underestimated. It is the ministry’s priority to also support growth in the domestic air connectivity between the islands of Seychelles, through more liberalised polices. This approach will broaden and enhance access to the outer islands to Seychellois and international visitors who would have otherwise been hard to visit”, Minister Derjacques said.

On behalf of government, Minister Derjacques thanked and congratulated IDC for achieving the milestone and for meeting the country’s vision of making the islands more accessible.

Following the creation of IDC in 1980, domestic flights for the company, which did not have any air planes, to the inner and outer islands such as Farquhar, Desroches, Coetivy, Remire, Marie Louise and others, were made by Air Seychelles and the air wing of the Seychelles People’s Defence Forces (SPDF). IDC’s flight operation started with the purchase of its first aircraft in 1985 ‒ the Cessna Caravan 2(F406) with a capacity to carry 10 passengers.

In his remarks IDC’s Aviation general manager, captain Marcus Labrosse said in view of continued development and activities happening on the islands, IDC has plans in the near future to replace the three Beechcrafts with a more comfortable and larger capacity fleet of ATR-42 aircrafts fabricated by a European company associated with Airbus.

“When you consider the kind of business IDC has ventured into and the services that it has to offer to the five and six-star hotels on the islands, it is absolutely essential that we not only maintain but increase the level of comfort on our planes,” captain Labrosse added.

The new Beechcraft was blessed by Deacon Louis Agathine from the Catholic Church after which the guests were invited for a tour on board.

The accompanying photos show some highlights of the ceremony as well as views of the aircraft’s interior. 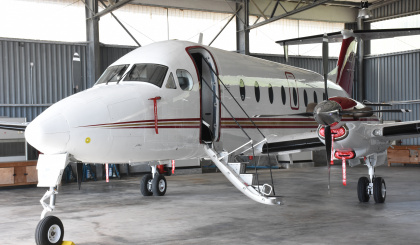 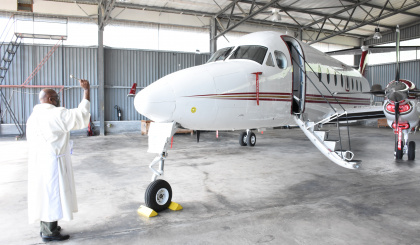 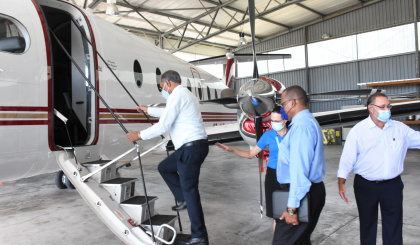 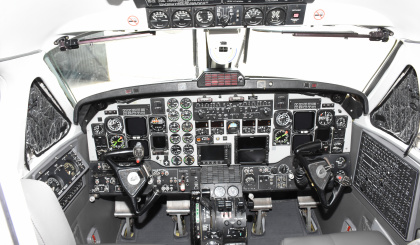 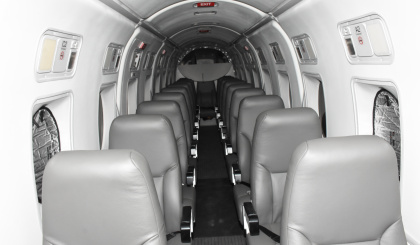