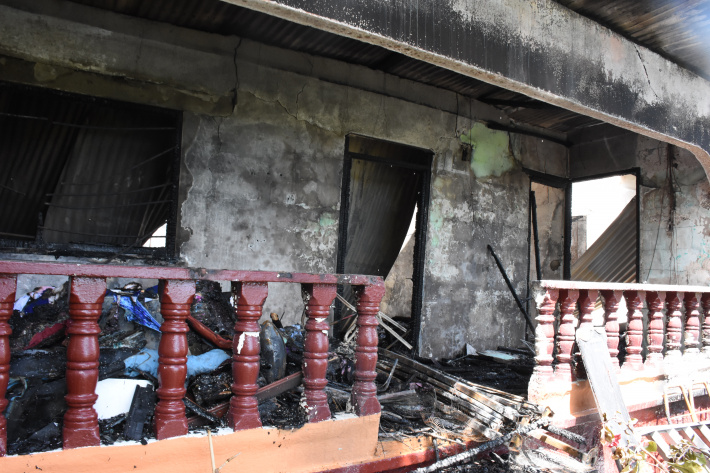 The home belonged to 65-year-old Marguerite Arissol who was inside the property with her disabled brother when the fire broke out. Both were temporarily trapped but they managed to escape unscathed.

Fire and Rescue Services were informed of the fire at 8.06am. Three vehicles with eleven personnel were dispatched to the incident and simultaneously the airport fire service was informed for assistance.

It took 3 hours for them to completely extinguish the flames as they had exhausted their water tank and did not have access to fire hydrants. Luckily for them they were able to access the PUC water supply through a pipe.

Daniella Arissol, the niece of the home owner, informed the press that they were unable to save any of their belongings.

The Assembly representative for Pointe Larue, Conrad Gabriel, promised that he will do everything he can to help the family. It is still not clear what started the fire.

A second incident occurred at 12.20pm where a fire was ignited at the landfill.

The fire department managed to put the fire under control and eventually extinguish it completely.

“When we got to the landfill we noticed that the fire had started as a result of some dump truck disposing flares at the landfill,” said Jones Madeleine, the spokesperson for Seychelles Fire & Rescue Services Agency (SFRSA).

He added that the public should not dump trash that is not allowed in the landfill as it can cause a fire as evident from last year's fire. Investigation is underway to identify the culprit.

Star Seychelles covered the area with coral fill once the fire was put out to prevent it from reigniting.