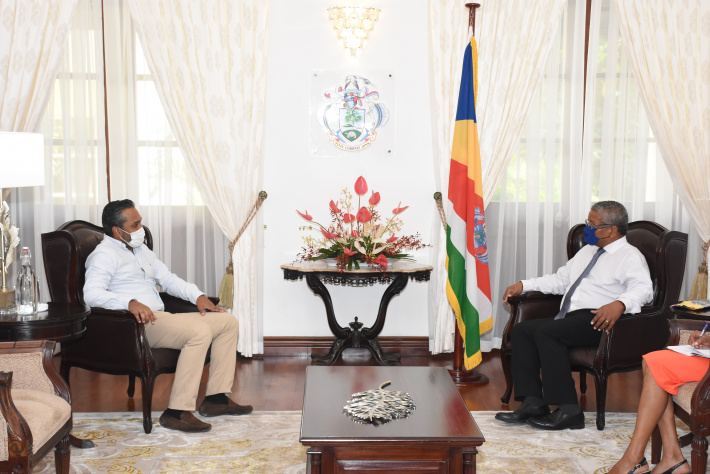 It has been said that sports in society can influence our understanding of gender roles and socio-economic issues, and they can help frame cities, states and national identities, while they can also boost tourism and revenue for a country.

In that spirit, President Wavel Ramkalawan yesterday welcomed four sports high achievers and ambassadors at State House to congratulate them on their achievements and also to thank them for the contributions they bring to the country.

Seychelles Football Federation (SFF) president Elvis Chetty, chairman of the Seychelles Cycling Association (SCA) Lucas Georges, swimmer Felicity Passon and running enthusiast Joel Melanie all had the chance to have a tête-à-tête with the head of state, sharing their accomplishments.

This was during the Caf’s annual general meeting which was held in Rabat, Morocco in March.

Mr Chetty, who is serving his third term as the local football federation chairman, won 40 out of 52 votes to gain a seat on the executive committee representing the southern zone of Africa along with Botswana's Maclean Letshwiti.

He followed in the footsteps of honorary SFF member Suketu Patel who was the vice-president of Caf from 2011-2017.

SCA chairman Georges was the second person to meet President Ramkalawan yesterday to share his achievement as he now sits on the international cycling governing body’s management committee, following his election during the sport’s continental body’s elective congress held recently in Cairo, Egypt.

During the Confédération Africaine de Cyclisme (Cac) elective congress, Mr Georges was elected as the candidate of Africa at the Union Cycliste Internationale (UCI) management committee.

He attributed his success to the years of experience and the level of duties delivered to Africa and the world which gave countries confidence to nominate and later vote for him for such a position, especially when coming from a country with no finances back-up in a strong campaign.

Following her ‘Mind Over Matter Challenge’ last weekend, swimmer Felicity Passon was the third person to be received by President Ramkalawan at the Salon des Gouverneurs yesterday.

Backed by the Ministry for Youth, Sports and Family, Passon made a coordinating charity swim challenge which will go towards a mental health project which she holds at heart.

Through the challenge, she collected funds from donors to finance an earmarked project.

The project consists of extending psychosocial support to the general public through the establishment of a ‘telephone and e-counselling service’ by certified professionals.

The support will assist affected individuals with a safe and confidential area to talk about their issues as well as providing them with coping skills that will have a positive impact on their lives.

During the event, she swam from La Digue to Praslin and back (approximately 15km).

With the current economic challenges that the country is facing, she wants to help alleviate any additional financial burden on the government by playing her part and assist the population in getting the mental health support needed to navigate through the current climate.

Other than the challenge, the reigning Female Athlete of the Year and President Ramkalawan also spoke about the Games of the XXXII Olympiad in Tokyo where the later pledged his full support for Passon and all the other athletes who will represent the country.

Enthusiast runner Mr Melanie was the fourth person to be received by the head-of-state yesterday, following the first race in the third phase of his ‘Run for a Good Cause Project’ last Saturday.

Saturday’s run which took place on La Digue was the first in a series of three which will also take him to Praslin in June, with the last challenge taking place on Mahé in August.

The project started in 2018 with the aim of raising funds for financially-struggling associations towards infrastructure development or other facilities to provide long-term support for Seychellois families and children.

The photos show the sports high achievers in the order President Ramkalawan welcomed them to State House. 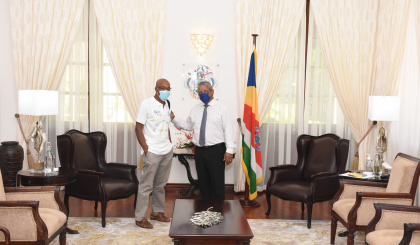 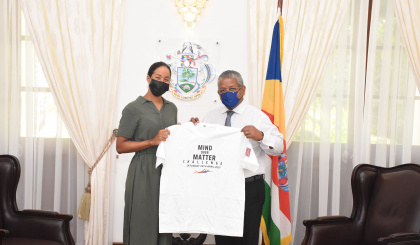 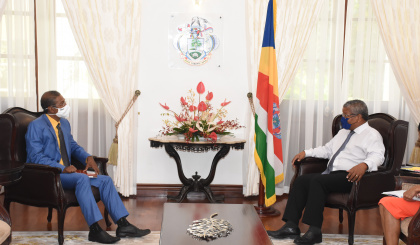