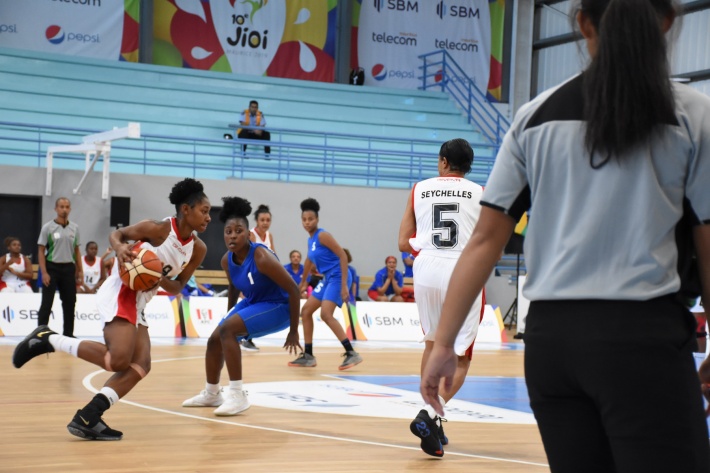 Seychelles have one foot in semifinal with win over Mayotte

The Seychelles women’s selection bounced back from their humiliating defeat against Reunion in their opening group match on Sunday to beat Mayotte 55-41 yesterday at the Phoenix Gymnasium, bringing them closer to a place in the semifinal of the 10th Indian Ocean Islands Games.

All will now depend on the final group match today between Mayotte and Reunion.

A win for Reunion will see Seychelles through to reach the last four, while a win for Mayotte will end Seychelles’ campaign at the 10th Games.

There was no change in coach Michel Malbrook’s starting five for yesterday’s match, fielding the same team who started against Reunion on Sunday and lost 20-73.

Our national selection showed their intention to win the match and advance to the next stage early on with a 12-9 lead after the first quarter.

The players from Mayotte had the same intention and early on in the second quarter, they managed to capitalise on Seychelles’ poor defending to score some crucial points, allowing them to close in at 17-15, before tying the match at 18-18.

Still not well disciplined in defence, especially when it came to collecting the rebounds, the players of coach Malbrook allowed Mayotte to score some easy points, until late in the quarter when they managed to improve their game to take a 27-20 lead.

Mayotte, however, kept pushing and managed to score three more points, ending the first half on a 26-23 score in favour of Seychelles.

It seemed that during the half-time break coach Malbrook went back to his drawing board as in the third quarter, Seychelles, led in the scoring by Sherifa Agathine, came out more organised to take a 29-25 advantage.

Not ready to give up yet, Mayotte kept the pressure, but the Seychelles players who had a point to prove after last Sunday’s defeat remained one step ahead and at the end of the third quarter they were leading 38-22.

At the beginning of the last quarter, the lead was cut to 38-35, but four points from captain Malbrook opened the gap to 42-35.

From then on, Seychelles gained some confidence and improved their game, thus extending their lead as they looked to seal a place in the semifinals.

When the score read 49-41 with less than two minutes to play, victory was already within the reach of Seychelles as they increased their lead to 51-41, 52-41, before adding two final points to end the match with a 54-41 victory.

In case of a Reunion victory over Mayotte, Seychelles will secure second place in the group and qualify to play the other group leaders which will be probably Madagascar who are still undefeated.

With 18 points, Sherifa Agathine was Seychelles’ top scorer in the match, while Nasra Ibrahima scored eight points to lead the scoring for Mayotte.

Reaction of assistant coach Tony Juliette: “At the beginning it was a very difficult and tight match, especially in the first two quarters where the scores were close, until the last two minutes of the second quarter where we managed to extend our lead. In the second half we managed to run our offence a bit better and we managed to score some easy baskets.

As a coach, I must say that we started the match without knowing what to expect, until the last minute of the second quarter when we decided to tighten up our defence and it came with some easy basket opportunities.

“Compared to Sunday, today we managed to organise our defence which enabled our offence to flow easily, allowing us to score more points. As for Mayotte, I can see that they have really improved, compared to the last time I saw them, and if we do not boost up our basketball, Mayotte will definitely overtake us.”