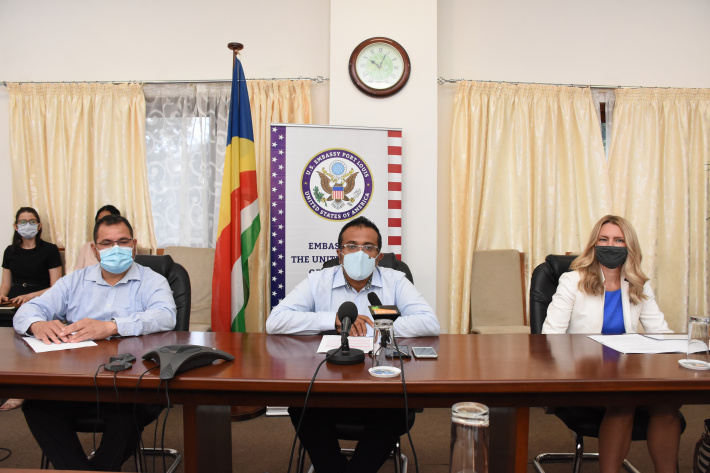 The Public Enterprise Monitoring Commission (PEMC) will soon have the capacity to boost its core function of monitoring the state-owned enterprises under its purview through a financial and fiscal risk monitoring system for automated data collection from those enterprises.

The electronic system for gathering the state-owned enterprise (SOE) data has been made possible through a grant from the United States Department of State’s Fiscal Transparency Innovation Fund (FTIF).

These grants are part of the United States government’s longstanding efforts across Africa and globally to promote good governance, democracy, and transparency.

The grant worth $83,203 (R1.5 million) will assist the commission in monitoring SOEs and enhancing transparency and accountability.

​The PEMC was set up to monitor and evaluate the overall performance of the public enterprises, ensure efficient operation of such enterprises, promote ethics of good governance in all business transactions, including financial matters such as investments and budget and also to give recommendations to improve performance and thus increase the return on investments.

The project will also include training of staff from both the commission and the SOE on a new system to boost risk-based financial reporting.

During a press conference yesterday at the Liberty House in Victoria, the Ministry of Finance, Economic Planning and Trade – the parent ministry of the PEMC – through Minister Naadir Hassan and the chief executive of the PEMC George Tirant, shed more light on the upcoming project which has been described as not only useful for the PEMC, but for the country as whole.

The United States government was being represented by Chelsea Bergesen, the political and economic officer – Seychelles – at the U.S. embassy in Port Louis, Mauritius.

Minister Hassan noted that, as mentioned in his budget address, one of the main priorities of the new administration is to bring more fiscal discipline with regard to SOEs, so that they do not become a fiscal risk for the country.

He thanked the US embassy for the gesture which he said will go a long way towards strengthening the government’s oversight on SOEs.

On behalf of the board of the PEMC, Mr Tirant thanked the U.S embassy for the funding of the new system which will, other than ease their work load, make it easier achieve their goal which is to strengthen the oversight of SOEs, transparency and good governance.

He said they are looking forward to the next milestone which will allow them to focus on other areas where they need to focus more to a better SOEs in the country.

Among the benefits of the new system, Mr Tirant said during the past three years they have been using Excel sheets whereby received information were being entered manually and had to be verified for mistakes.

This, he said, was very time consuming and prevented them from providing timely information which he described as crucial.

The new system will allow SOEs, after receiving training from an international consultant, to enter their own data through the PEMC platform where it will be verified and analysed.

On behalf of the U.S embassy, Mrs Bergesen said fiscal transparency informs citizens how government revenues and tax revenues are spent and is a critical element of effective public financial management, while it also helps to build market confidence and sustainability.

She said the U.S embassy and the PEMC have a shared goal of enhancing transparency and accountability of the SOEs in Seychelles.

“We are thrilled to partner on this project with the Ministry of Finance, Trade Investment, and Economic Planning, and the PEMC to achieve this goal,” noted Mrs Bergesen, who further added that the relationship between the two countries is particularly strong and began the day that Seychelles gained independence in 1976, while we enjoy a history of partnership and cooperation based on shared priorities.

She also noted that the United States’ unwavering commitment to democracies like Seychelles is what makes it possible to do programmes like this one today, digging deeply into technical aspects of government like monitoring SOEs that make democracy function and develop a path forward, ensuring that accountability and good governance will flourish.

In 2019, Seychelles benefited from an FTIF grant for the first time, amounting to $24,000 for a project entitled ‘Building Capacity in the Office of the Auditor General’.

Mrs Bergesen noted that the project, which created a forensic auditing manual, helped to pave the path to a Seychelles which leads Africa in accountability, transparency and good governance.

“Today, we are pleased to be tripling this grant award amount to Seychelles,” she added.

To date, the FTIF has awarded approximately $40 million for projects benefitting over 65 countries to enhance budget transparency, advance public financial management and improve the transparency of licensing and contracting in natural resource extraction.

U.S. embassies largely manage these projects, which range from small assistance efforts aimed at training civil society and the media on budget transparency, to larger projects that assist government officials in strengthening budgeting and auditing processes.

Since 2012, the State Department and USAID have provided foreign assistance to help governments to improve budget transparency and to support civil society organisations promoting fiscal transparency.

This work complements the role of the Fiscal Transparency Report.

The FTIF is co-managed by the Department of State’s Office of Monetary Affairs (OMA) and USAID's Bureau for Economic Growth, Education and Environment (E3).