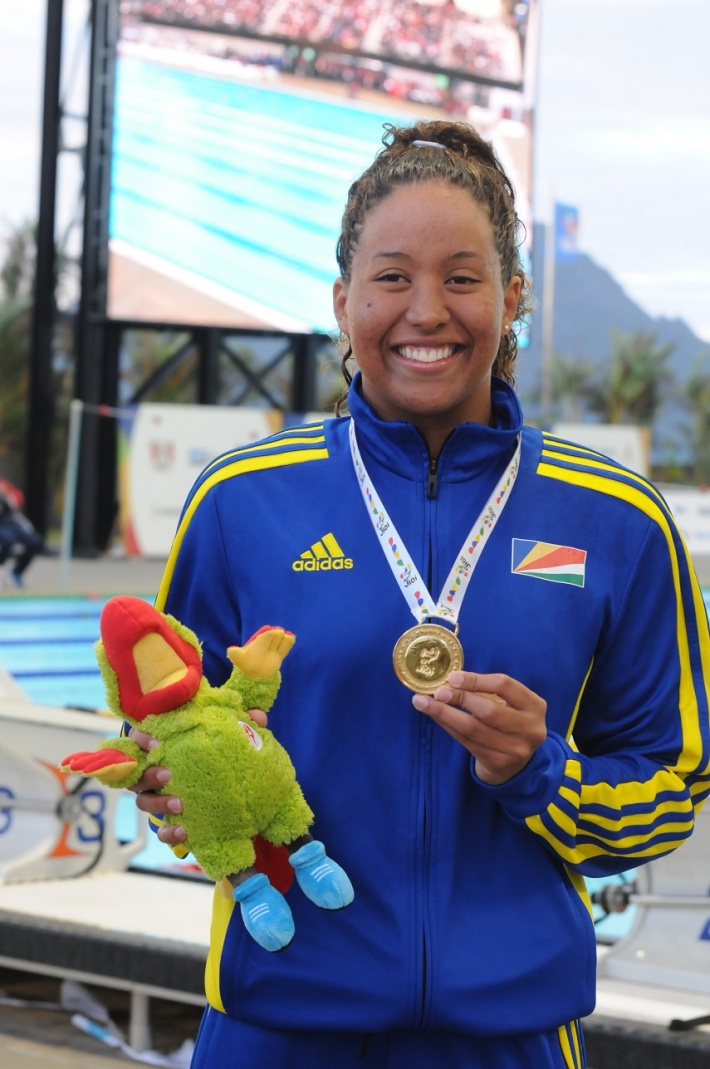 Seychelles’ swimming queen Felicity Passon has the chance to add to her gold medals tally of six when she competes on the last day of the swimming competition of the 10th Indian Ocean Island Games, taking place in Mauritius.

In the swimming pool of the Côte d’Or Sports Complex, Passon won two more gold medals yesterday as she dominated the 100m backstroke and the 50m butterfly to bring her tally to six gold medals.

In the cold and windy weather,the 100m backstroke was the first of eight finals of yesterday’s swimming competition and Passon stopped the clock at 1 minute 03.45 seconds (1:03.45) for a gold medal and at the same timeset a new games record. Camille Koenig of Mauritius was second in 1:06.82 for the silver medal and the bronze medal went to Emma Morel of Reunion in 1:08.28. The other Seychellois in the race, Aaliyah Palestrini finished in sixth position with a time of 1:12.58.

In the 50m butterfly, Passon took the gold medal with a time of 28.06 seconds while Emma Morel from Reunion won the silver medal (28.51 seconds). The bronze medal went to Manon Dijoux also of Reunion (28.98 seconds). Palestrini finished the race in 30.89 seconds for a seventh position.

“I am very happy to win again today, but not satisfied with my performance. These are not my best times as I swim faster than that but I have to live with it,” Passon said.

In the men’s 50m butterfly, Mathieu Bachmann won the silver medal in a time of 25.55 seconds behind Bradley Vincent from Mauritius who won the race in a time of 25.08 seconds for the gold medal. The bronze medal was won by Pierre Yves Desprez from Reunion in 25.88 seconds. The other Seychellois, Adam Moncherry finished the race in fourth position in a time of 26.24 seconds.

Simon Bachmann also won a bronze medal in the 400m freestyle in a time of 4:08.69. The gold medal was won by Jean-Baptist Bernet from Reunion in 4:07.68 and Corentin Trinez also from Reunion took the silver medal in 4:08.68. Seychellois Damien Payet finished in sixth position in a time of 4:22.05.

The happiest swimmer from Seychelles yesterday was no other than Janil Lucas who won a bronze medal in the handisports 50m freestyle in a time of 55.03 seconds.

He started celebrating even before the start of the race and continued after the finish to the applause of the crowd. The five athletesreceiveda standing ovation from the crowd upon finishing the race. It was Scody Victor from Mauritius who won the race for the gold medal in a time of 32.84 seconds. The silver medal went to Ramdria Narivelojac from Madagascar in a time of 41.08 seconds.

The other gold medals for Seychelles have been won by Samuele Rossi in the 50m breaststroke and Mathieu Bachmann in the 100m butterfly. 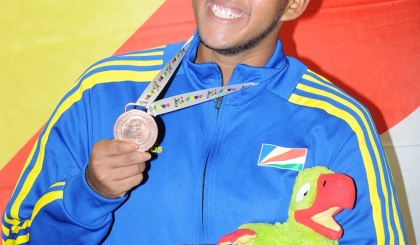 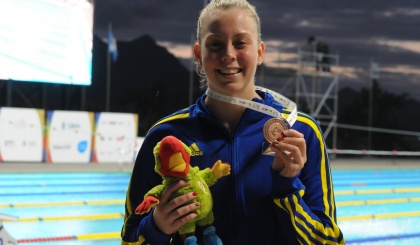 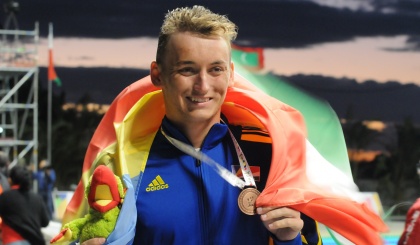