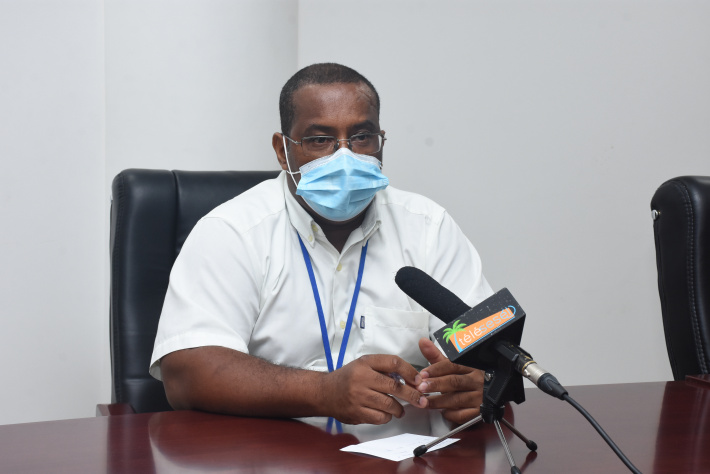 As from Tuesday April 20, 2021, the theory examination for driving tests will be done through a digital platform, instead of physical writing of examination papers and whereby the results will appear immediately after its submission.

It was the land commissioner, Wilson Denis, who made the statement yesterday morning with regard to new procedures that learners have to undergo to obtain a pass certificate to present to the police before going on to do their driving lessons on the road.

He was speaking to the press at the department of Land Transport, Quadrant Building.

He stated that upon passing the exam, as a show of proof, learners will be given a stamped certificate of attendance with security features as well as a personal number which must be presented immediately after to the police traffic department before they can pursue their on the road driving lessons. A person has to pass the exam before he or she can take driving lessons on the road.

Mr Denis said the theory test will be now held at the Seychelles Institute of Distance and Open Learning (Sidol), Mont Fleuri.

The test will be done via tablets at the institute, where learners have to answer their twenty-five multiple choice questions in one hour.

He further said that upon completion of the exam, learners have only to submit it on their tablets and they will get the results immediately after, including a printed version copy.

He noted that before it used to take two to three days to get the results and learners had to come with their IDs to the police to get their results.

He said that this new method will eliminate the risk of the results being tampered with, something which could have helped many people in the country to obtain driving licenses fraudulently.

Although Mr Denis refrained from commenting on an ongoing investigation in a fraudulent case in this respect involving five workers from his department, it is to be noted that five workers have been suspended following suspicions of issuing fraudulent certificates to learners through bribery.

“We want to make sure that a person who drives on the road understands and knows traffic laws because they keep people safe. A person must not think that when behind the wheel, the road entirely belongs to him or her. There are other vulnerable people using the road and precautions must be taken at all times. A motor vehicle is considered a dangerous and deadly weapon in the wrong hands,” Mr Denis said, urging learners to study well the highway code booklet which contains all the answers to the exam questions.

He said that in relation to Covid-19 health measures, only ten people including one invigilator will be allowed in the classroom.

He also said that learners will have to use their NIN and a computer generated password (own) to log in.

Compared to the past where classes were held on Tuesdays and Thursdays, he added that depending on the number of participants, classes are expected to be held every day, at five one-hour stages during the day, from 9am to 3pm. All appointments for the exam, including the paying receipts, are to be collected from the police.

Mr Denis added that both passes and failures will receive a proof certificate to present to the police and noted that failures have to rebook for another appointment with the police for a re-sit.

He said that the exam results are sent digitally to the police immediately after the exam before the learner comes in at the police with their certificates to get the necessary clearance for them to pursue with their road driving lesson if they have passed.

In the past, learners came only with their ID cards to learn of their results from the police. He added that the new method of holding the exam will also allow the department to keep a digital database.