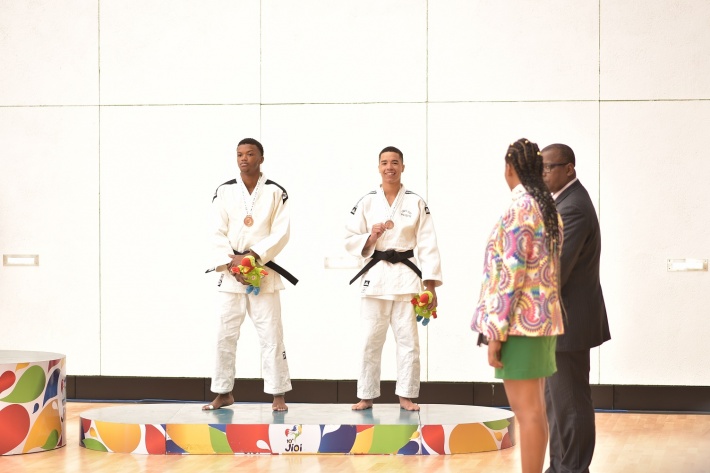 Vidot (left) with his bronze medal

Seychelles’ men’s and women’s judo teams were in action on the first day of competition at the Côte d’Or Sports Complex.

After a win by ippon over 2015 Indian Ocean Island Games (IOIG) champion Pascal Laurent from Mauritius in his first fight in the -60kg class, Vidot lost his second pool fight by ippon to Samuel Bamcolo from Mayotte. In the semifinal, he again lost through ippon to Abdou Nazir Bin from Madagascar.

“The other judokas in the competition are all at a higher level as most of them have been training in France for some time. I had the chance of making it to the final but I made a mistake which proved costly but on the whole I am very satisfied with my performance even though I knew it could have been better,” said Vidot

The competition yesterday was for both male and female lightweight categories. The preliminary rounds were held in the morning for the following categories: -48kg, -52kg, -57 kg (female) and -60kg, 63kg, -66kg and -73kg (male).

Dario Larue lost to Lita Rambeloso from Madagascar in the -66kg division and to Daniel Louis Begue from Mauritius. In the men’s -73kg eliminating rounds, Keith Larue lost by ippon to Maily Rakotovelo from Madagascar and later lost by the same technique to Theo Pitaya from Reunion.

Coach Naddy Jean said that the overall performance of his athletes is satisfactory and he hopes they can gather medals today in the heavyweight category.