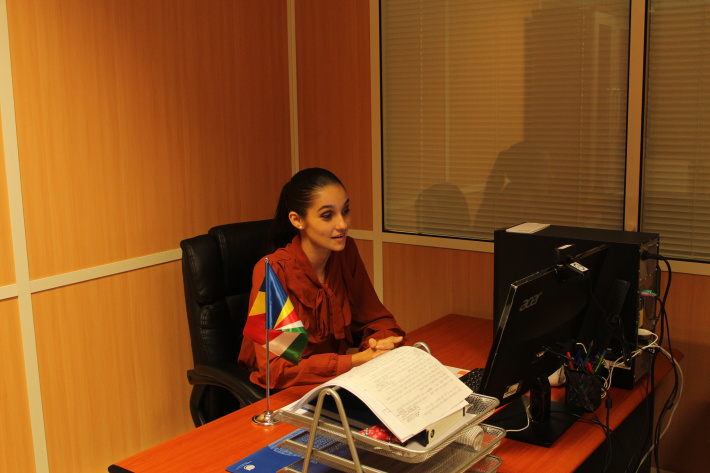 In recognition of Seychelles’ championship of the blue economy agenda at the continental level, the department of the Blue Economy was invited by the African Union to be a panelist at a high profile virtual forum entitled ‘Green Talks – Bridges to the High-Level Green Investment Forum EU-Africa’ that was held yesterday.

It is integral of the ‘Green Talks’ that are being hosted across Africa by Portugal and its collaborators to build momentum for the High-Level Green Investment Forum that will be held in Lisbon on April 23, 2021 which aims to prepare the grounds for Europe and Africa to explore new ways and possibilities to work together for a brighter future.

In her address Miss Gonthier largely reflected the perspective of a young recruit who has been fully integrated and was actively involved in the field of blue economy governance at a very critical stage of the national development of this strategy.

Crucial to highlight is that the principal secretary for the Blue Economy, Kenneth Racombo, has been advocating for increased youth involvement and stakeholder inclusivity in the governance aspect of the blue economy. Concurrently, his respective department has also been exploring means of enhancing buy-ins at the national level in an attempt to locally emulate the popularity and success that Seychelles as a country has had overseas in the blue economy space.

Miss Gonthier will be participating alongside a handful of dignitaries and prominent figures of international organisations and bodies notably, Commissioner Josefa Sacko of the African Union Commission, Vice-President Ricardo Mourinho Félix of the European Investment Bank and the event’s moderator, Jean-Paul Adam, who is currently the director of Technology, Climate Change and Natural Resource Management Division at the UN Economic Commission for Africa.

Press release from the

Department of the Blue Economy