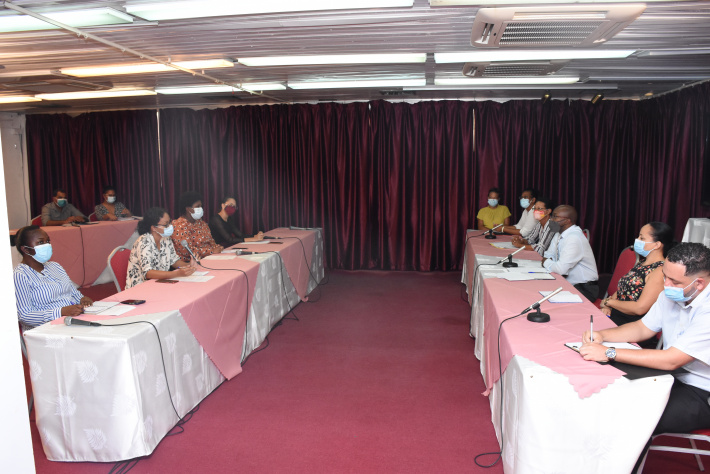 The panel (right) during the meeting with the press yesterday (Photo: Thomas Meriton)

Education minister Dr Justin Valentin has reassured parents facing financial difficulties that the Dedicated Fund remains at their disposal to assist their children with stationery, uniforms, breakfast and snack, if need be.

This statement was made yesterday in a press conference wherein the Ministry of Education reacted to a news report by the Seychelles Broadcasting Corporation (SBC) aired on Monday evening.

The news report looked to address the drastic decline in students benefitting from the Dedicated Fund, which this year shifted from being managed by the Agency for Social Protection (ASP) to the Ministry of Education.

In yesterday’s press conference to address the issue, Minister Valentin stated that the news report depicted an inaccurate picture of how the Dedicated Fund is presently being managed and it suggested that students in need are not being assisted.

“This is not the case – the impression that students are being removed from the Dedicated Fund list without any reason is also incorrect. Insinuations that schools are unable to assist children in need is also incorrect,” started off Minister Valentin in the press conference.

“I felt that the views portrayed in the news were personal views and hence felt it my duty to clarify this subject and explain the real situation. The government, through the Ministry of Education and its welfare system, is adamant that it is the right of all Seychellois children to develop comfortably and in a secure environment,” added Minister Valentin.

The press conference comprised an exhaustive panel of officials from the Ministry of Education including the principal secretary for early childhood, primary and secondary Dr Odile Decomarmond, as well as officials from the ASP including its chief executive, Brenda Morin.

A sum of R4.2 million has been budgeted and was approved by the National Assembly for the Dedicated Fund for 2021.

According to the Ministry of Education, the R4.2 million is apportioned to primary and secondary state schools at the start of each term based on their size.

It is the responsibility of each school to manage these funds responsibly, all the while ensuring the needs of the most vulnerable students are catered for.

“These schools spend this money by paying the tuck-shop operators, pay for students’ uniforms, pay for their school meals and other items students need. We provide a minimum of R10,000 when this money is used up […] and later reimburse their money,” explained financial comptroller at the Ministry of Education, Linda Monthy.

PS Decomarmond explained that parents have to fill a form and submit the form to the schools for approval before students can benefit from the fund.

She also added that access to the Dedicated Fund is not automatic, meaning that parents have to fill in the form every school year in order for their children to gain assistance.

To note, legal guardians, social workers and even teachers can fill in the Dedicated Fund forms on behalf of the vulnerable student.

Stakeholders such as the district administrator and district welfare officer further provide their recommendations on whether students should be assisted, based on their household situation.

Mrs Morin, chief executive of the ASP, explained that it is recommended that those who are not receiving supplementary welfare at ASP should not benefit from the Dedicated Fund.

In line with this policy, the ASP streamlined the list of Dedicated Fund recipients accordingly although the head teacher of Takamaka primary, Magda Rose, added that schools look at each student’s situation on a one-by-one basis.

While a total of 2,784 students benefitting from the Dedicated Fund in 2020, there are presently 1,744 students receiving some form of assistance under the fund, a reduction of 1040.

Nonetheless, PS Decomarmond said that this list is far from finalised since we are only three weeks into the new school year.

“The final list for this first trimester is not yet complete and is being adjusted as and when parents are filling in and submitting their forms,” said PS Decomarmond.

On his part, Minister Valentin said that the reduction in the number of students receiving assistance should not been seen in a negative light but rather it could also be an encouraging sign, showing that some parents are back up on their feet.

A concerning issue which was raised by Mrs Morin was the abuse and misappropriation of funds under the Dedicated Funds, “such as teachers who were eating and taking from the Dedicated Fund, paying for their new glasses and other forms of abuse”.

This ill-use of the Dedicated Fund was recently discovered when Mrs Morin joined the helm of ASP, and these mishandling of funds had yet to be picked up by an audit exercise up until then.

“Abuse can be seen not only in regards to education but in other budget lines as well and this is why we have to work collaboratively with our partners[…]it is important to collect data and compare them to analyse whether everyone is in sync, to identify abuse and also ensure that students get what they need,” added Mrs Morin.

The ASP is conducting a number of investigations in regards to misappropriation of money such as in the Dedicated Fund, Vulnerable Housing Repair Scheme among others.