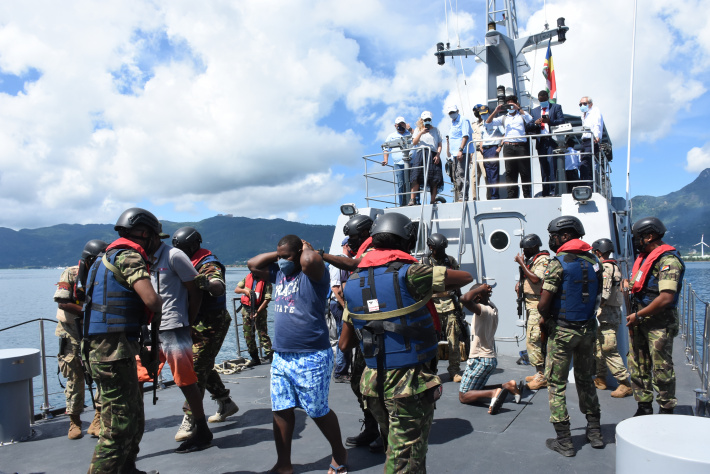 The Seychelles Coast Guard (SCG) last Thursday held a demonstration on its capabilities in fighting crime at sea to representatives from Somalia and Yemen.

This forms part of regional work done in maritime security in collaboration with the United Nations Office on Drugs and Crime (UNODC).

The 45-minute demonstration comprised boarding, searching and seizure operations held on board SCG vessel ‘La Flèche’ in the waters off St Anne Island. The exercise forms part of a tri-lateral relationship between UNODC, the Seychelles government and the Japan government through its sponsorship. The boarding demonstration was performed by officers from SCG and those from the Special Force Unit (SFU) commonly known as ‘Tazar’.

Apart from the Somali and Yemeni representatives on training here, the demonstration was also witnessed by Alan Cole, the head of Global Maritime Crime Programme (GMCP) based in Sri Lanka; Ryoichi Horie, the Japanese ambassador to Seychelles; Lieutenant Colonel Jean Attala, the acting commander of SCG, and other representatives from UNODC and SCG.

UNODC started conducting training with the country’s law enforcement since 2012 with regard to the prosecution of Somali pirates, their imprisonment including their transfer back to Somalia to finish their sentences, and later moved to training in all forms of maritime crime happening in the region with regard to the trafficking of weapons, drugs, human and terrorism among others.

“Seychelles with its very strong history of maritime governance, and fisheries protection and law enforcement at sea, and its experience of the Somali piracy, has become a very strong regional player in maritime security. There is no better place in the Indian Ocean to do this training than here in Seychelles,” Mr Cole said.

“The particular interest from our friends from Somalia is the protection of the exclusive economic zone and fisheries resources. This is in order to make sure that the fisheries resources are available to the State and not stolen by foreign vessels,” Mr Cole added.

He claimed the maritime security training being conducted in the country is so far excellent and described the demonstration by the SCG as perfect. He hailed the strong partnership with SCG.

The UNODC’s training instructor for the region (Bangladesh, Sri Lanka, Seychelles, Maldives), Steward Melville, said that the boarding, search and seizure training for SCG and other marine enforcement agencies locally and internationally, varies from two-week courses up to six-week courses. He said the most important element is that boarding is done professionally, safely and legally.

Lieutenant Connie Anthony, the SCG’s training, planning and liaison officer, said that the training provided by UNODC is a boost to SCG’s capacity to fight against illegal activities at sea in its daily operations.

She added that apart from partnering with other international forces in patrolling the region, SGC which goes on patrol with the assistance of SFU personnel on board its vessels, also receives the support of local entities in its daily operations, namely, the police, the Anti-Narcotics Bureau (ANB), the Seychelles Maritime Safety Authority (SMSA), the Seychelles Fishing Authority (SFA), including the local fishermen.

The UNODC has for the past two decades through its training programmes been helping to make the world safer from drugs, organised crime, corruption and terrorism. 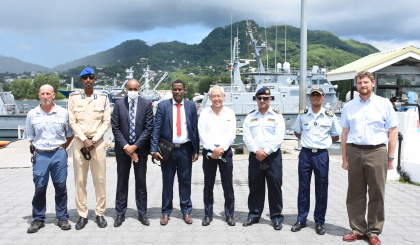