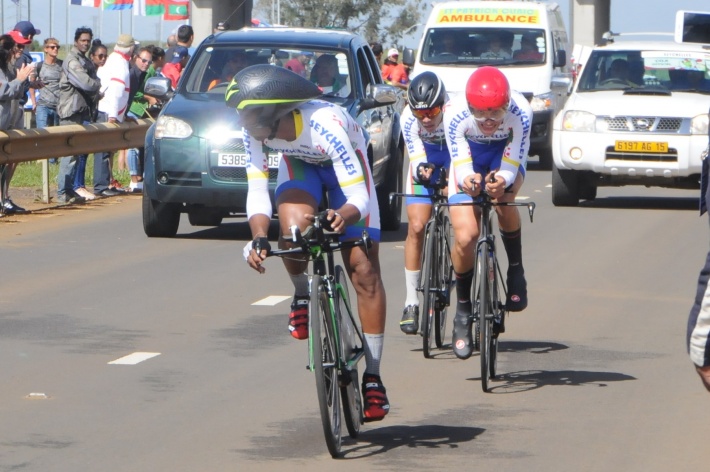 The Seychelles team during the team time trial

The Seychelles cycling team were not able to defend their team time trial bronze medal won at the last Indian Ocean Island Games in Reunion in 2015 as they reached the finish line 14 seconds behind Madagascar at this year’s Games in Mauritius.

The Malagasies crossed the finish line in 52 minutes 07 seconds (52:07) in the 38.6km team trim trial for the bronze medal to shatter the Seychelles team’s dream of defending the bronze medal or even getting a higher finish.

The 38.6km team time trial race took place on Saturday morning opposite the Côte d’Or Sports Complex and the teams had to do two laps to cover the distance. The teams were released in the following order: Comoros, Mayotte, Seychelles, Madagascar, Mauritius and Reunion.

The Seychelles team lost captain Arissol early in the first 10 kilometres due to an injury, probably as a result of the re-adjustment done on his bicycle earlier, making it uncomfortable for such a race as they are not used to it. In fact, all Seychellois riders had to readjust their bikes before the race started and this caused some riding discomfort. They had to adjust their handles to specific arm length, seat distance and gears, this according to the rules for time trial races. As a result they only had five minutes to warm up instead of 30 as prescribed by the law.

On the second lap, the Seychelles team encountered more misery when Christopher Gerry had to drop out of the race for the same reason as his captain. This left only Dominique Arrisol, Denus Oredy and Jean-Yves Souyave with the task of completing the race.

The team’s technical director, Lucas Georges, said he was disappointed for not winning a medal which was the team’s aim, but he was not disappointed with his team’s performance as they were let down by the fact they had to re-adjust their bikes just before the competition.

“Today, it is very difficult to judge our performance because we encountered some abnormal circumstances. We were the only team who had to re-adjust our bikes setting before the race and this affected the cyclists as their bikes were adjusted to their individual specification. Even though I agree that all of our bikes were off setting, I think the officials were too strict with our team as in many international competitions they won’t bother you with a difference of a few millimetres, but on the whole it is a lesson learned,” Georges said, noting that the team had just received the brand new bikes and they had only one training session on them.

He added that the wheels on the bikes are old ones used for training and not suitable for this type of competition, but the new wheels have just arrived and are still in Seychelles.

“As we could not part in this race on our old bikes which could cause accidents, the message is for the authorities to always make available our equipment as early as possible so that we could have time to train on them and also take them out for competition. Proper certified setting of bikes are done through competitions and if we had received our bikes earlier I don’t think we would have been in this situation,” Georges added.

For his part captain Arissol said he was disappointed the incident happened with his team and he was not able to make his presence felt.

“I cannot ride a bike that has just been reset especially in a competition like this one. If I could have stayed in the race, I am sure we could have covered the 14 seconds over the Malagasies and retain our bronze medal or even get a higher ranking,” said Arissol who noted that the team will stay focus for the next two races.

The next race is an individual time trial of 18.5 kilometres today at the Côte d’Or Sport Complex and the cyclists are looking to improve their performances.