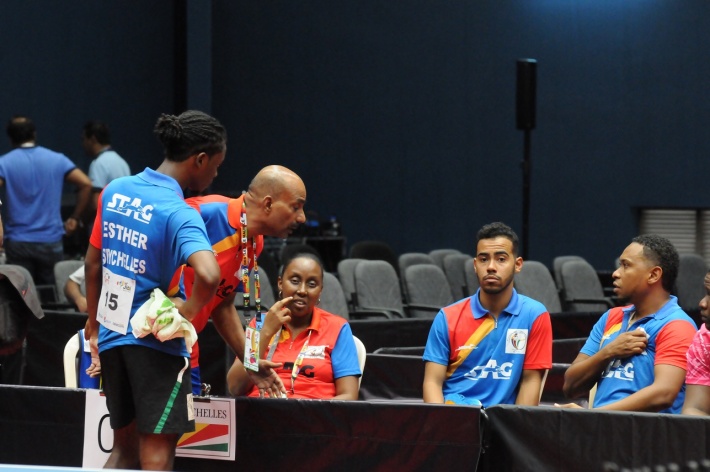 The IOIG table tennis competition teed off on Saturdaywith the men’s and women’s team events.

In men’s pool elimination matches, the Seychelles team comprising Godfrey Sultan, Nicholas Esther and Mario De Charmoy-Lablache beat Comoros 3-0 and also beat Mayotte 3-2 and lost 1-3 to Mauritius. Coming out second in the pool, they booked themselves a place for the cross knockout semifinal againstgroup B winners Reunion. The Seychelles’ men’s team could not withstand the pressure from the Reunion side and lost the semifinal 0-3. Sultan lost the first game 0-3, De Charmoy-Lablache lost 1-3 and Esther lost his game 1-3.

“All I can say is just hard luck for us otherwise we could have done better. The boys did play well but when the opponents are playing better than you that’s not your day. All the sets were very close in this bronze medal game but we just couldn’t get the break,” said Seychelles’ table tennis team coach, Pakistani Arif Khan. He also expressed his disappointment for not winning a medal(either silver or bronze) which he said they came so closeto win.

Coach Khan though hopes for better performances and why not medals in the remaining matches during the week.

In the women’s team event, Seychelles were drawn in pool B alongside Madagascar and Reunion. The team made up of Christy Kilindo, AnniessaBenstrong and Laura Sinon were eliminated in the pool stage after losing to Reunion. They started well by beating the same side 3-2 in their first encounter but lost by the same score (2-3) to Madagascar. The Reunion team managed to beat the Malagasy team 3-2 to book their place for the semifinal.

The gold medal for the men’s team event went to Reunion with a 3-1 win over Madagascar, while the Maldives took the women’s’ team event gold medal with a 3-2 victory over hosts Mauritius. Madagascar won the bronze medal ahead of Reunion.