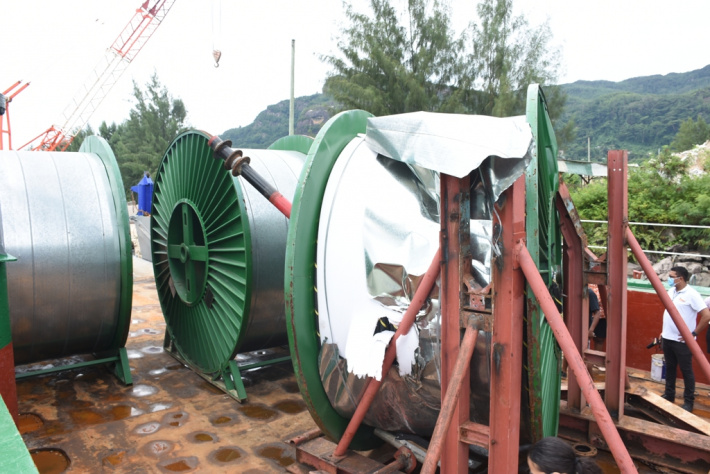 The undersea cable project will be delayed for a year on account of the damaged drum (Photo: Thomas Meriton)

An incident which has damaged one of the Public Utilities Corporation’s newly procured submarine cable drums has forced a one year delay in the installation of a new length of undersea cable from Eve Island, Praslin to Round Island, and from Praslin to La Digue.

This unfortunate incident has brought the much-awaited installation to a staggering halt on the very eve of the day it was expected to kick off.

According to Ravi Sunassee, managing director of electricity at the Public Utilities Corporation (PUC), the work was scheduled to start yesterday, March 25, and the incident occurred on March 24.

“It is unfortunate that the project to connect the underwater cable to Round Island has to be postponed because one of three submarine cable drums was damaged while being loaded onboard last night. The chain holding the cable drum broke and the drum fell on the stand. As a result the pieces of metal on the stand damaged the cables,” said Mr Sunassee.

The submarine cables were being loaded onboard a vessel at the Zone 20 of Providence.

Given that these cables are not available in Seychelles, Mr Sunassee explained that PUC now has to place a new order and it will take about six to eight months before the new cable drum reaches Seychelles.

“We have to send in another request, the drum has to be manufactured and shipped to Seychelles. It will reach Seychelles in August or September and by then it will not be possible for PUC to undertake the work due to rough seas during the south-east trade winds,” he added.

“It is not possible to install the cable now with only two drums left. Even though there are three cables drums, all of them are needed for the single underwater cable and the work was expected to be done in three phases.”

PUC has estimated that it will eventually start installing the cables in February or March 2022.

The undersea cable laying project is costing PUC about USD $500,000 (over R11 million), and now an additional USD $100,000 (some R2.2 million) more due to the damage to the cable drum. The cable drums were procured from China.

At present, this cable routes through the Round Island substation before continuing to La Digue and this has come with various hardships for PUC and people residing on La Digue.

This is due to the fact that the cable continuously gets damaged in the same location near Round Island because of the hostile underwater environment and rough seas at that spot, leading to power failure on La Digue.

The cable has been damaged a total of four times, the most recent episode occurring in August 2020 during the Feast of Assumption festivities. It is the second undersea cable that brings electricity to La Digue and was installed in 2006.

The other undersea cable which feeds electricity from Baie Ste Anne station directly to La Digue is the oldest since it was laid in 1984 but does not usually encounter as many problems and faults as the one which goes through the Round Island substation.

With the south east trade winds approaching and the rerouting delayed, PUC is gearing up to closely monitor the length of cable near Round Island that feeds electricity to La Digue.

“We will have to regularly send down divers to check on the conditions of the cable and ensure that they are well secured, and fix whatever needs to be fixed. Additionally, PUC has a standby generator on La Digue to cater to any power outages,” added Mr Sunassee. 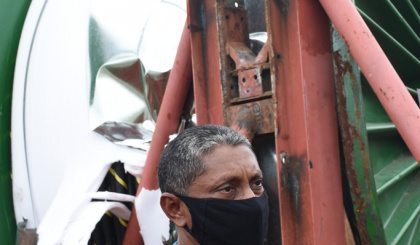