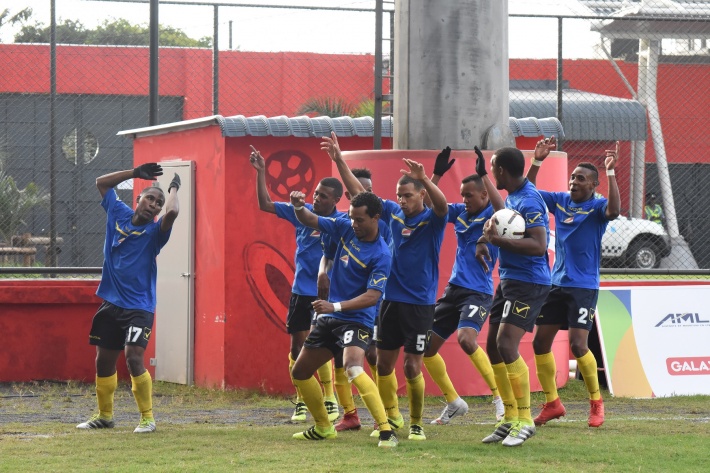 Seychelles players celebrate after getting the equaliser

A draw and a point earned against hosts Mauritius is the outcome of Seychelles’ first match at the 10th Indian Ocean Island Games.

Coached by Gavin Jeanne, team Seychelles yesterday held Club M to a 1-1 draw in their first group A match at the packed Georges V Stadium in Curepipe, breaking the hearts of the home crowd who wanted no less than a win for their team against the Seychelles side who beat them in the final of the 2011 Games at Stad Linite on Mahé.

For yesterday’s match, coach Jeanne started with a 5-3-2 formation and at that point it was clear that he was playing safe and that a very defensive approach was his main strategy.

The plan, however, misfired as it took the Mauritians only two minutes into the match to open the score through Ashley Nazira following a lack of coordination in the Seychelles defence.

From then on, the match was mainly one-sided, with Club M applying pressure on the Seychelles’ backline, forcing them to defend recklessly.

Meanwhile, in the midfield, Seychelles was non-existent and out of desperation, Yannick Manoo picked up a yellow card in the 11th minute for a dangerous foul on Nazira who was causing all sorts of problems to the Seychelles defenders.

In the 22nd minute, Club M almost doubled their lead when Colin Esther lost the ball to Stephan Nabab whose shot was pushed into corner by goalkeeper Ian Ah-Kong.

Despite under-performing, Seychelles occasionally put together some passes, but they were not enough to trouble the Mauritian defence.

The first half ended with Club M still in the lead, giving coach Jeanne some homework to do during the break.

In the second period, the Mauritian selection doubled the pressure and Kevin Perticots was a real thorn in the Seychelles defence.

In the 64th minute, coach Jeanne sent in Darel Damoo to replace Gervais Waye-Hive and with a pair of fresh legs on, Seychelles started to push forward but a well-disciplined Mauritian defence contained all their offences, until the 68th minute when they failed to clear their line after a free-kick, allowing Colin Bibi to slot the loose ball in under the goalkeeper’s arms to level the score at 1-1 and silence the packed Georges V stadium.

With the match at 1-1, both sides pushed forward to try and snatch the win and all three points.

In the 79th minute, coach Jeanne sent in Don Fanchette to replace Collin Esther as he needed fresh legs in defence to stop the Mauritian attacks. In offence, he gambled on Elijah Tamboo who entered the game in the 83rd minute as substitute for Roddy Melanie.

Mauritius, on the other side, kept the pressure up front stretching goalkeeper Ah-Kong to full length twice at close range in added time.

Despite the pressure, Seychelles managed to hold on to the score to share the points with Club M.

How did the coaches react?

Seychelles coach Gavin Jeanne: “The aim was not to collect a point, but in the end it is football and we have to accept the result, even if we are not happy with it. It was a tough match and we had a very good opponent who was being backed by its home crowd, so it was not an easy situation for us. Even if we dropped two points, we are not out of the race, and we have another match against Madagascar on Saturday, so we will be all out to give a good performance.

Strategies need to be changed whenever things are not working, until a solution is found.

“In terms of pressure, we were not really under pressure since we had 88 minutes to equalise, so it was just a matter of adjusting our game until we managed to score.”

Mauritius coach Akbar Patel: “We must admit that the Seychelles team gave a good display, despite the huge pressure from the crowd. This is football and you do not have control over everything. We have a slight advantage since Seychelles will be playing Madagascar on Saturday, while we will be playing on Monday. Overall, we will learn from our mistakes and we will come out better in our next match. This is the only way to progress. The pitch condition is not an excuse as both teams played on the same field. In the end it is all about the state of mind. The one who want it more will always perform better.” 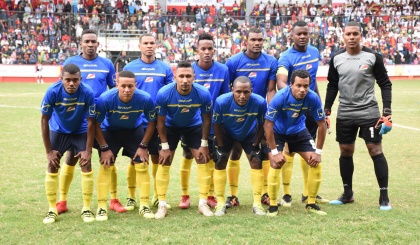 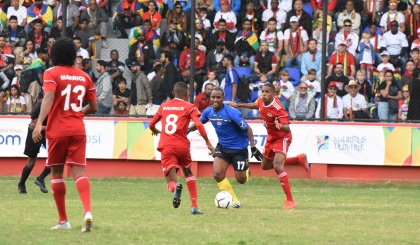