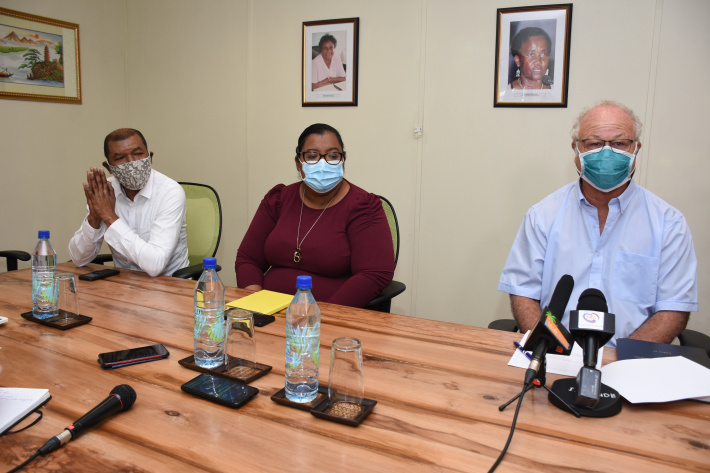 The Seychelles National Institute for Culture, Heritage and the Arts is the name of a new institution that will be the guardian of our culture, heritage and arts.

This is a departure from the current administrative framework of a Ministry of Culture.

This institution of the State has a clear mandate to safeguard our culture and heritage as an island nation with a creole identity and ensure our participation in cultural life.

The institute is a self-governing and independent body under the authority of the Head of State and is the highest policy making body with responsibility for culture, heritage and the arts for the preservation, protection, promotion and appreciation of the Seychellois cultural heritage.

“This proposal has been given the green light by the Cabinet of Ministers and we are now finalising the legal aspects of this new institution in order for it to be in full operation,” noted the Mayor of Victoria, David Andre in a press meet yesterday. He was accompanied by principal secretary for Culture Cecile Kalebi and the honorary cultural ambassador Patrick Victor.

Mr Andre quoted Marcus Garvey: “En pep ki pa konn son lorizin, son listwar ek son kiltir i parey en pye dibwa san rasin (tradiksyon)”. The department of culture to date has been administered under a ministerial framework. The department has been attached to various ministries subject to the perceived benefits and conveniences of the time and subject to ministerial reshuffling. Over the years the department has been attached to the following ministries: Ministry of Education and Culture; Ministry of Tourism and Culture; Ministry of Community Development, Youth, Sports and Culture and Ministry of Internal Affairs, Local Government, Youth, Sports and Culture. The department of Culture also has oversight of the following agencies: National Arts Council (Nac); Creative Industries and National Events Agency (Cinea); Seychelles Heritage Foundation and Seychelles Creole Institute,” Mr Andre remarked.

He also stressed on the fact that as Seychelles celebrates 250 years of its settlement, it is important to note that the Seychellois people of different origins continue to live in peace and harmony united by the unique Seychellois way of life.

“Culture is the business of everyone and the business of all ministries. A Ministry of Culture cannot on its own achieve its objectives in safeguarding culture and heritage. The preservation of culture and heritage must be an integral part of our society’s development. Everyone must be equipped with the tools to safeguard the Seychellois culture and have the opportunity to participate in the cultural life of our country. In a democratic society, it is not up to political power to determine or dictate its terms. What the cultural sector requires is a clear sense of direction and permanence that will guide the actions of ministries, departments and agencies, non-governmental organisations, communities and citizens contributing to the sector,” he stated.

PS Kalebi welcomed this new institution and noted that “the creation of the Seychelles National Institute for Culture, Heritage and Arts is in line with the mandate under which the department of Culture was operating. There will be structural changes within our department in order to function under the new institution. We are currently undergoing intense work to bring about this new concept. We have had the chance to consult with our partners and we are certain that this institution will be stronger to ensure a dynamic promotion and appreciation of the Seychellois creole culture and identity by providing opportunities for every Seychellois to experience cultural life and to develop their creative abilities and skills.

Ambassador Victor noted that “for us cultural activists, with this institute we are getting the opportunity to create something ideal for all artists, regardless of their political background. We are here to promote healthy, cultural and artistic initiatives from people from all walks of life. Already a conversation has started and I receive calls from artists putting forward their concerns. Too often we hear people say that we are losing our culture and now we are having an opportunity to bring forward our contribution on a national level. People like to say that we are losing our Creole culture; the institute is there to provide guidance, facilitate and empower actors, monitor and evaluate programmes as well as explore new spheres of intervention”.

How will it function? Will Mr Andre stay as Mayor of Victoria?

This also means that after the appointment of the secretary of state for Culture, Heritage and the Arts, a new Mayor will be appointed according to Mayor Andre.

What will happen to the current department of Culture?

“The institute will incorporate the existing sections and units of the department of Culture under the leadership of a principal secretary/permanent secretary. We will make sure that all sections under the department of Culture will be reinforced and making good and efficient use of resources. So far nobody has lost their jobs or being asked to leave their job,” noted Mr Andre.

The main objective of the institution will be to encourage artistic excellence and innovation by promoting and developing Seychelles artistic and creative strengths at home and abroad so as to maximise societal, economic and reputational values for the country, stated Mr Andre.

Mr Andre concluded the press meet by talking about the creation of a National Cultural Fund. “The Seychelles National Institute for Culture, Heritage and the Arts shall administer a National Cultural Fund aimed at supporting all objectives of the institute outlined above. In particular it will support meaningful projects that will allow people to transfer knowledge, skills and meaning of our cultural heritage for the benefit of the Seychellois society.”

The National Cultural Fund provides partners, non-governmental organisations, businesses and philanthropists in Seychelles and abroad with a means of contributing to the preservation, protection, enjoyment and art forms promoting our culture and heritage.