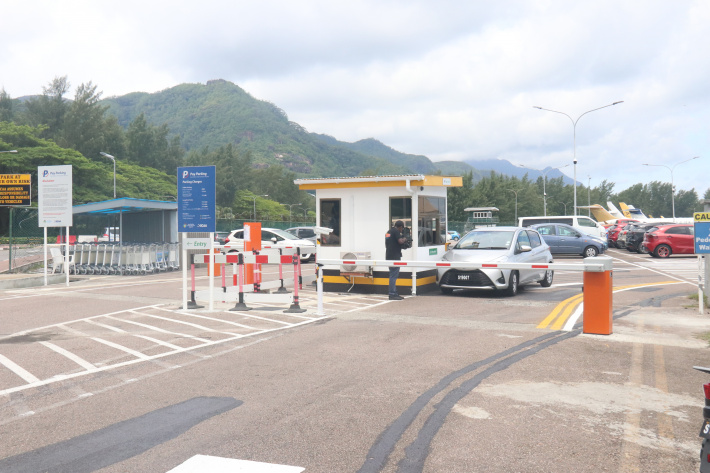 SCAA’s pay-parking system is one of the projects aimed at upgrading the authority’s services (Photo: Anel Robert)

A group of foreign consultants from Abu Dhabi, UAE are assisting the Seychelles Civil Aviation Authority (SCAA) with its development plans.

The consultants yesterday met with the management of SCAA, its chief executive Garry Albert and Minister for Transport Antony Derjacques.

Although the media were invited to cover the meeting, it was later told that it could not take photograph of the meeting and a press statement would be provided in lieu of an interview.

Nonetheless, Minister Derjacques later opted for an interview with the national broadcaster in which he explained the aim of the meeting.

“Today I visited SCAA where we have been discussing how we can bring further developments to the Seychelles International Airport,” said Minister Derjacques.

The foreign consultants are assisting the civil aviation authority with undertaking its development plan to improve infrastructure and services at the airport.

To note, it is not the first time that these consultants assist the SCAA with its projects.

“They are here to listen and give their advice where possible, as they have done so on previous occasions. This time around SCAA’s upcoming projects are massive, and it needs to go ahead with these projects to bring a commercial change at the Seychelles International Airport,” said the minister.

SCAA plans to add on new infrastructure aimed at providing better areas for passengers to feel at ease when they enter and leave Seychelles, the minister continued.

The management of SCAA sat down with the Minister for Transport and consultants to explain their objective and vision.

In return, the consultants will provide their commentaries on the projects. They are also expected to undertake a visit during their stay in the country.

The SCAA has, on previous occasions, expressed its plans to bring more developments at the tiny Seychelles International Airport in order to upgrade its services and meet International Civil Aviation Organisation (ICAO) safety and security standards.

One of these projects, which it recently completed end of last year, is its pay-parking system.