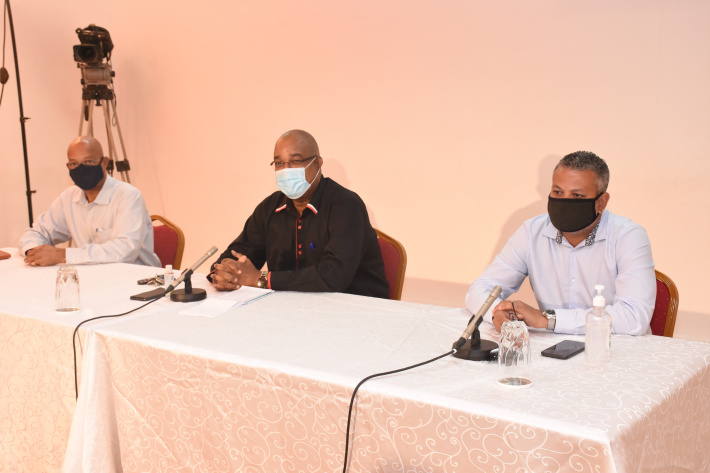 Opposition party United Seychelles (US) has criticised the new administration’s handling of the second wave of Covid-19 in the country as well as its recent decision to reopen borders to all countries.

In a televised press conference yesterday, US called for a thorough review of the government’s coronavirus response, claiming the government’s actions to be insufficient in light of the rising cases of Covid-19 among the population.

Even in spite of the country’s economic crisis, US is urging the government to place the country under a full 14-day lockdown, and amp up the Covid-19 vaccination programme, so as to put the Covid-19 spike under control.

“United Seychelles seeks to express its concerns in regards to the situation which we can only describe as out of control. It is evident today – just four months after the world applauded us for our good handling of the pandemic – that Seychelles is now among one of the countries where Covid-19 is causing havoc,” said Patrick Herminie, a member of the party’s national executive committee.

Dr Herminie was accompanied and flanked by two other US executive committee members – leader of the opposition in the National Assembly Sebastien Pillay and former minister Jacquelin Dugasse.

Comparing Seychelles’s small population to its neighbour Mauritius that has over 1 million inhabitants, Dr Herminie observed that it is extremely worrying that Seychelles has surpassed Mauritius in its number of total Covid-19 cases.

As of yesterday morning, the number of Covid-19 cases in Seychelles had reached 705 while Mauritius had recorded 547 total cases.

“For US, this is clearly the result of a laissez-faire attitude by everyone concerned; not only the citizens but also by those who were supposed to lead by example,” stated Dr Herminie.

Further, the opposition party has expressed concerns on the Ministry of Health’s new policy which states that persons placed under 14-day quarantine are not to be tested for Covid-19 unless they show symptoms of the virus. Dr Herminie argued that this means that positive, asymptomatic cases of Covid-19 can go undetected simply, alleging that this is dangerous for the populace.

“US unreservedly condemns the government’s decision to reopen the frontiers to everyone who holds a proof of vaccination or a negative PCR test[…]” also stressed Dr Herminie.

Citing the World Health Organisation’s advisory published in various news outlets, Dr Herminie noted that WHO officials have recommended that countries not use vaccine passports as conditions for travel due to the “critical unknowns regarding the efficacy of vaccination in reducing transmissions and limited availability of vaccines”.

The government’s plan is to only use the vaccination passport as a requirement of entry until mid-March 2021 by when, it is hoped, that a significant number of Seychellois residents would have been vaccinated.

In response to this decision, Dr Herminie yesterday said: “To reopen the country completely in mid-March, another decision taken by government, is dangerous because they have stated that only 25% of the population would be vaccinated by then.”

“This is unacceptable for the simple reason that children under 16 will not have a vaccine to protect them and many above 60 would not have been vaccinated by then. This places us in a precarious situation that could lead to what we call eugenics in medicine – the weakest will be eliminated naturally because they are not protected.”

Referring to President Wavel Ramkalawan’s working visit to the United Arab Emirates in December 2020, Dr Herminie stated that US is troubled over the method in which the Sinopharm vaccine was introduced into the country.

“We are not against the vaccine, and we are not in a position to claim whether it is safe or not. We encourage Seychellois to take the vaccine because, at present, it is the only concrete tool to help fight against the virus. Nonetheless, we are unsettled in the manner in which the vaccine was introduced into the country in December 20 after the president went to UAE in December 13 and came back with 50,000 doses of the vaccine.”

“It is unfortunate to say that when these vaccines had reached our shores, it had yet to be approved even by the Chinese government. This vaccine was only approved on December 30 and we wonder what would have happened if the Chinese authorities had found the vaccine to be less than 50% effective,” said Dr Herminie.

“US also feels that the information in regards to the extent of the Covid-19 situation is not being properly reported. For instance, we are no longer getting data on how many tourists are infected versus GOP holders, we are just told they are foreigners. We no longer know which establishments have been placed under lockdown, how many clusters there are[…]it is important that the government and health ministry start dishing out correct information,” underscored Dr Herminie.

Dr Herminie stated that US is even dubious as to the exact number of Covid-19 related deaths recorded so far.

When asked whether US was politicizing the Covid-19 situation, Dr Herminie said that objections to a government’s decision should not be seen or taken as a political maneuver.

“When we were in government the leader of the opposition, who is now the president, criticised many of our decisions including the manner in which the former government was managing Covid. Our objections should be seen as a way to help the current government,” he explained.

“US is fully behind the vaccination of 70% of our population and is asking Seychellois to take the vaccine. At the same time, we are calling on the government to bring in additional vaccines such as Oxford, Moderna and maybe Pfizer so that everyone can access the vaccines in different districts, possibly even in pharmacies. We have nothing to politicize because Covid affects us all.”

Hon. Pillay added: “We have to put a stop to tendencies where people think an objection of the current government politicizes an issue. Criticisms have been acceptable in the past, so why should we now take an approach where criticism is bad?”

US also stated that the current administration should be more serious about working together with the opposition, particularly with the leader of the opposition, instead of paying lip service to collaborative efforts.

“We are not in the government, we can only make suggestions and influence the government through mediums such as the national media or social media, to say what everyone wants to say but are seemingly afraid to,” highlighted Hon. Pillay.