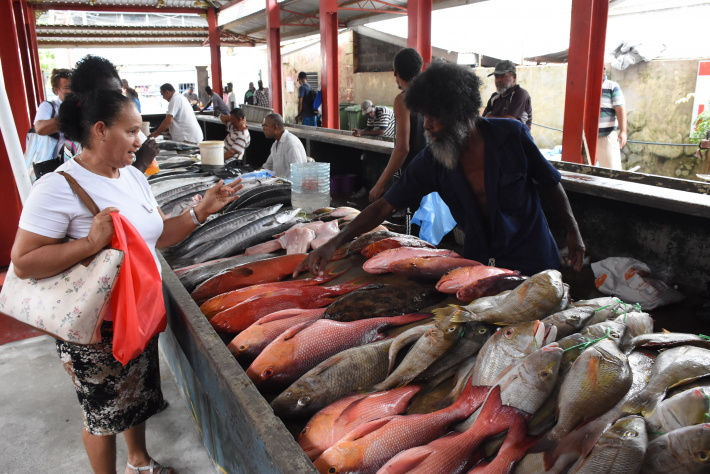 Fishermen selling their catch at the market

The year kicked off to a great start for both the fisheries and agricultural sectors, with a significant 49 percent increase in fish catch for Q1 of the year, as compared to the same period of 2019. However, with the Covid-19 pandemic fast turning into a global nightmare, the success was short-lived as both sectors grappled with the economic downturn.

With the pandemic an imminent threat throughout most of the year, the majority of countries and states turned their focus towards increasing domestic production of food supplies and improving, or at least maintaining some sense of food security.

Seychelles, being heavily-reliant on importation for most of the products consumed, has not been spared as imported food prices soared on account of shipping disruptions, but most specifically, the foreign exchange shortage and subsequent spike in rates.

The fishing sector was not spared, as the sector which was once the second pillar of the economy fell to its knees, with exportation of fish-related products halted due to the closure of borders and logistical challenges.

The then Ministry of Fisheries and Agriculture in March called out to some 1,500 persons involved in artisanal fishing on some 500 vessels to register with the SFA for a fish-processing programme, put in place to safeguard food security, while also offering some economic relief to the sector.

The plan called on fishermen to resume fishing activities and in turn have access to a guaranteed market through the Seychelles Trading Company (STC), after processing. Seven fish processors were instrumental to the plan, in addition to STC as a major distributor to retail outlets.

Ice and bait concessions also applied to fishermen on the programme.

Statistics held by the National Bureau of Standards (NBS) indicate increases in production in Q2, 2020, where production was up by 16 percent, to 14,102 tonnes as compared to the same quarter in 2019. The increase held through to Q3, up 29 percent from Q3 of 2019.

In 2019, the major exporter produced 45,812 tonnes of canned tuna, a figure which is likely to be surpassed, having already manufactured 40,355 tonnes by the third quarter of this year.

IOT Ltd processes tuna caught in the Indian Ocean, exporting all over the world under the most famous seafood brands including Mareblu, John West and Petit Navire. The firm earlier this month unveiled expanded storage facilities, to ensure stock, especially yellow fin tuna will last until February 2021.

Earlier this year, Seychelles recorded a hike in the number of imported Covid-19 infections after a number of seafarers, mainly from Western Africa and who are in employment on-board Spanish-flagged fishing vessels, tested positive for the virus.

The spike followed some controlled crew change activities and was stopped in its tracks by the department of health’s prompt actions in isolating the infected seafarers aboard their respective vessels.

Despite maritime security efforts, illegal, unreported and unregulated fishing incidents do occur. Such acts are punishable by Seychelles’ legal framework and when caught, perpetrators end up behind court docks defending the charge.

By July, four vessels had been intercepted by authorities on suspicion of illegally fishing in Seychelles’ territories.

The ministry in September rescinded the ban on commercial red snapper exports, in the face of drastic reduction in demand on the domestic market.

The ban, which was due to take effect as of April 15, sought to ensure red snapper is more available and at a more affordable price to the average citizen. However, with hotel and restaurant activity to a minimum, exportation would provide avenues for artisanal fishermen and fish processors to continue operations and generate income.

With the decision, a new set of regulations will also come into effect, including a release policy for red snapper measuring less than 32cm, and provisions for commercial exports or loads in excess of 20kg.

With the October 22-24 elections, a new administration was elected into office, and the ministry changed from the hands of Minister Charles Bastienne, to two pairs of hands, those of Jean-François Ferrari and Flavien Joubert. Under President Wavel Ramkalawan’s administration, each assumed a dossier, Designated Minister Ferrari taking up fisheries, while Flavien Joubert tackles agriculture.

Upon assuming office, both ministers conducted familiarisation visits and meetings at relevant authorities and departments, as well as to fishing and agricultural communities on Mahé, Praslin and La Digue.

Cinnamon production and livestock production picks up towards year end

Livestock slaughters of pigs and cattle also increased this year, almost doubling in terms of the number of cattle slaughtered over the quarter. As per records, 15 cattle were slaughtered in Q3 2019, and Q3 2020 saw 33 slaughtered cattle and an additional 194 pigs on top of last year’s pigs for the same quarter.

World Food Day on October 16 was commemorated with a week-packed full of activities, including the launch of the first agro-forestry national orchard project on a 15-hectares Montagne Posée plot, in addition to the allocation of 12 agricultural plots at Au Cap to young farmers.

Five years after the last occurrence, the fisheries department and concerned authorities confirmed reports of the occurrence of a ‘harmful algal bloom’ event, around the islands of Praslin, Denis and Félicité.

An algal bloom is a natural phenomenon involving the rapid growth and population explosion of algae in the sea whenever there are sufficient nutrients, calm conditions, hot temperatures and other specific conditions. These blooms may cause death of fish and other marine animals.

This phenomenon was first reported to local authorities on Friday November 27, and is still ongoing, with turbid water and slicks with colours ranging from yellow to dark brown. Fishermen have been advised to refrain from selling any of the dead fish and the public from consuming them as certain species of the algae can be poisonous.

Such blooms can potentially be dangerous, reducing the ability of fish and other aquatic life to find food, causing entire populations to leave an area or even die. Harmful algal blooms cause thick, green muck that impacts clear water, recreation and businesses. 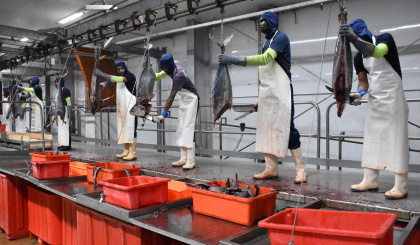 Workers at the IOT factory line. Production of canned tuna increased in 2020 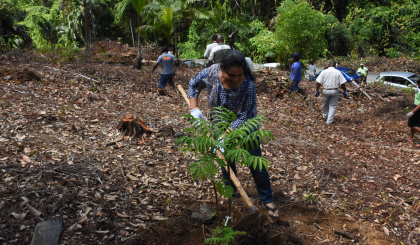