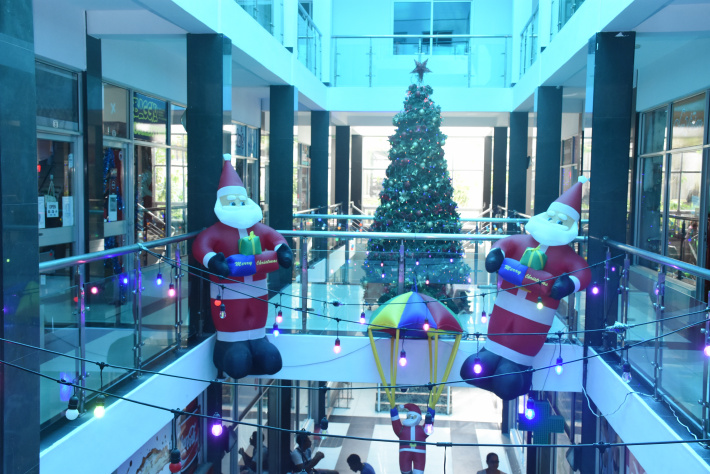 A partial view of OJ Mall in its festive attire (Photo: Anel Robert)

With the Covid-19 pandemic, economic recession and looming uncertainty, it was fairly evident from months ago that the festive period would be somewhat dialled down this year. With many faced with limited financial resources in their pockets, it was expected that the general consumer spending frenzies witnessed in preceding years would be done away this year, and that consumers and economic actors would be more financially disciplined, as advised by Governor of the Central Bank of Seychelles (CBS) Caroline Abel throughout the year.

However, despite the economic situation and warnings, it seems as though it was business as usual for most, with the customary practices of gift-giving, house embellishing and family gatherings. Seychelles NATION had a chat with a few business owners in Victoria regarding business this Christmas.

For most businesses the festive season usually lead to increased sales and profits, as people seek to buy gifts and to treat themselves and loved ones during this holiday season traditionally based on the notions of sharing and caring. This year has been no different say most business-owners, as consumers have continued to spend as usual, and even surprisingly, spending even more than usual.

CT Best & Less, a shop located in OJ Mall which supplies toys and home wares saw a spike in the number of shoppers during the three days leading up to Christmas, and saw no major difference in sales as compared to previous years.

“I think it is safe to say sales have been the same in terms of volume this year. Especially on December 23 and 24, town was congested as people scurried to buy presents, toys for the children. Yes, people are worried about the pandemic but to say that they were so bothered that they refrain from shopping and exchanging gifts would be untrue. One thing I noticed this year though is that there have been no complaints about pricing, or the quality of the toys as was the case in previous years but the transactions have been more easy-going,” a representative said.

The same can be said of fashion stores and outlets that usually make good sales around such period as everyone prepares to look their best for parties, gatherings and large-scale events at different establishments. Owner of ‘Zonm Zil’, Molly Sidonie, attributes the improvement in sales over the last week to the fact that people cannot travel for end-of year shopping as is usually customary, coupled with the fact that shoppers have been unable to shop online on account of restrictions and travel bans.

“Honestly, most of my stock is almost finished. In fact I faced some difficulties, as I am yet to receive my Christmas stock which I was supposed to have received before Christmas, but luckily I had some other stock to rely on, but we did fairly well and even managed to clear out some of the older stock.”

“Before, I travelled to get my stock myself and one week later I would have already received everything, but now I have to order, and with barely any inbound airlines and air cargo prices hiked, I have to opt for shipping cargo, which takes even more time,” Ms Sidonie remarked.

Despite being faced with shipping disruptions and not having received all of the glitzy and glamorous Christmas stock yet, Zonm Zil saw a large number of shoppers, most of whom flocked to the shop on Christmas Eve. This year’s bestsellers have been floral shirts and shorts, and more casual outfits, as restrictions on mass gatherings and large-scale activities are still in place to prevent the propagation of the Covid-19 pandemic.

“Some people are buying because they are thinking they might not be able to do so next year, on account of foreign exchange rates. Each time I have received new stock lately, the prices have been slightly higher so some people have preferred to buy now at a lower price, while others are doing so as they think they might not have the cash to do so next year. I think people are making the effort and being more mindful though,” Ms Sidonie added.

Similarly, shop manager at Lily Accessories, Shamira Marie, saw a spike in Christmas sales, and expects that more local businesses will continue to benefit as consumers turn to local retailers, wholesalers and suppliers to satisfy their wants and needs.

“People are still buying, and in fact they bought more, I think maybe because people are not travelling. We sold out of a lot of things so I restocked the shop by Saturday. In fact, since the onset of the pandemic, I noticed more consumers turning to local businesses which are good for business-owners, employees and the economy.”

Lily Accessories, located at OJ Mall, sells accessories, make-up and other little bits and bobs from the United Kingdom (UK). Unlike toy stores who are Christmas favourites among shoppers, Ms Marie is anticipating as large a crowd ahead of New Year’s celebrations, primarily in the two days leading up to the New Year holiday.