Anse Etoile fishermen get their own association |21 December 2020

A collective decision taken by Anse Etoile fishermen has given rise to the newly registered Anse Etoile Fishermen’s Association.

The association was officially launched yesterday by Vice-President and former representative of Anse Etoile, Ahmed Afif, in the presence of Minister for Fisheries and the Blue Economy Jean-François Ferrari and member of the National Assembly (MNA) for Anse Etoile, Georges Romain.

It is made up of five members on its executive committee including chairperson, Dimitri Maiden.

“We started the association around August this year but it only came into effect last week,” explained Mr Maiden.

“The association consists of five members who will take all the decisions but they must all be present for this to happen. There are many things that we want to take up[…] The members on the association are mostly boat owners, since they voice out the concerns of other fishermen and coordination is much easier.”

The main aim of the association is to act as the voice of the Anse Etoile fishermen who have had to put up with various challenges to their profession over more than a decade.

Although they have recently gained a more suitable area to sell their fish, the fishermen are still looking to improve their work environment.

“Our greatest priorities at the moment are pontoons because our fishermen presently do not have the facility to properly take off the fish from their boats. They have to trudge through the mud and climb rocks to get to shore,” said Mr Maiden.

“It really becomes a problem; it’s not hygienic, many get injured and sanitation of the fish is not good. It’s really not appropriate in this day and age for this to be happening.”

Speaking to the fishermen present, Vice-President Afif stated that it is important for Anse Etoile to get adequate facilities such as pontoons, a well-functioning ice plant, electricity, water and a fish market.

However VP Afif noted that this should not only be a government effort but rather a collective work whereby the fishermen also do their part, when and where possible.

“You have a chairman, an executive committee so meet up with them, talk to them and find solutions to some of your problems,” said the vice-president.

Minister for Fisheries, Mr Ferrari, noted that the setting up of an association would be a bonus for the district because it is easier for registered associations to gain funding or grants from foreign and even local bodies.

The minister also noted that, by coming together, the fishermen are now greater in strength and hence their voices can be further amplified in comparison to if they were working in isolation.

He also expressed the need for the fishermen to find ways to help themselves first, and put pressure on authorities such as the Seychelles Fisheries Authority (SFA) to get things done.

VP Afif, Minister Ferrari and Mr Romain all expressed their willingness to continue to support the association and its endeavours.

The meeting yesterday was also an occasion for the fishermen present to voice out some of their concerns. 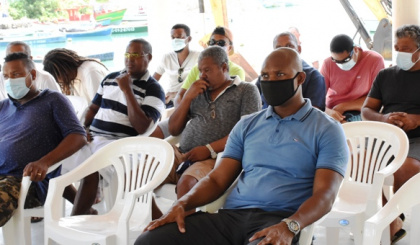 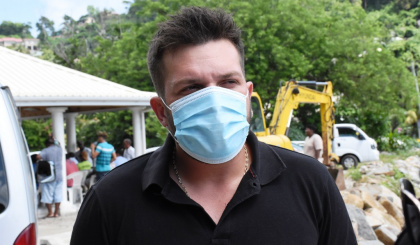