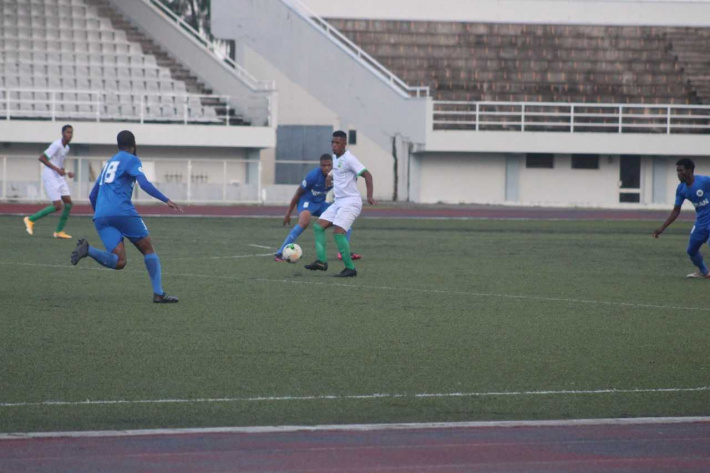 Championship One league winners Real Maldives claimed the scalp of their northern neighbours Northern Dynamo in a hard fought 2-0 victory on Thursday afternoon for their first win in the SeyPearl Premier League.

The Anse Etoile club who had lost their two opening matches in the league, showed their intention as early as the 2nd minute when Malagasy Jean De L’Or Tsaralaza released Josip Ravinia who eluded his marker to shoot at Northern Dynamo goalkeeper Mario Banane who had to turn the ball into corner.

Northern Dynamo went close in the 10th minute after some neat interchange of passes involving Aldo Dufresne and Marcus Cedras before the former slipped the ball to striker Carlos Onezime who rounded two defenders but shot straight at Real Maldives goalkeeper Madrid Adrienne.

The players of coach Don Anacoura opened the scoring in the 25th minute from Nick Labiche’s superb cross field pass to Jean De L’Or who had sneaked in at the back post and he stabbed the ball past goalie Banane to make it 1-0.

Northern Dynamo tried to redress the balance and in the 33rd minute Dufresne threaded a pass to Malagasy Rajamana who got a lucky break but shot over the bar from a good scoring position.

Glacis-based Northern Dynamo almost got caught as they went on the offensive when Jean De L’Or played a well-weighted pass to Marlon Rose who was clean through but could not lob the ball into the net with goalkeeper Banane out of his goal as the first half ended in favour of Real Maldives with Northern Dynamo losing their captain, Gambian Modou Jallow through injury before the interval.

In the second half, Northern Dynamo came out more determined to level matters and in the 56th minute, Dufresne played a throw-in to Gambian striker Musa Njie whose shot on the turn was pushed into corner by goalkeeper Adrienne.

Goalkeeper Adrienne had to show great reflex in the 62nd minute to tip over the crossbar Rajamana’s beautifully struck free kick from the edge of the penalty area.

In the 72nd minute, Real Maldives countered swiftly when a Northern Dynamo corner broke down and Ravinia raced clear with his teammate Rose awaiting his pass in a two-on-one situation but the young striker tried to go on his own and the ball rolled into the grateful arms of goalkeeper Banane to waste a gilt edge opportunity.

Ravinia though made amends seven minutes later when Northern Dynamo lost the ball in midfield to substitute Andrew Jacques who fed him and after some exquisite control he unleashed a thunderous shot and the ball crashed into the roof of the net for a 2-0 lead. This goal knocked the stuffing out of Northern Dynamo who suffered their first loss this season and their coach Bryan Bastienne was very disappointed with his team’s disjointed performance when he spoke to Sports NATION after the match.

“The players seemed to have underestimated our opponents and did not listen to instructions we gave to them and did not play according to what we had trained and prepared for this encounter and overall it was a very bad showing,” the Northern Dynamo coach told Sports NATION.

As for coach Don Anacoura, he was pleased with his team’s win in the Premier League which he felt came at an opportune time.

“It was vital for my team to win today before the league break to bolster confidence and we played well in the first half though we had to defend for long periods in the second. But we remained compact and disciplined so all in all, it was a good result which will provide a big lift for the team,” the Real Maldives coach related to Sports NATION.