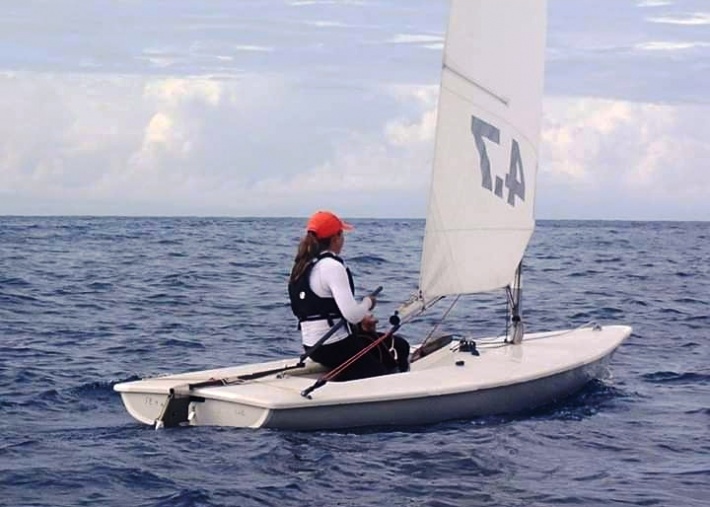 Hoffman is the winner of the Suzuki Marine 4.7 Cup competition

Mathiot and Hoffman sail to victory

Sailors Dean Mathiot and Chantal Hoffman are the grand winners of the Hunt Deltel Optimist Cup and the Suzuki Marine 4.7 Cup competitions, following the last races of the series held last weekend.

Initially programmed as two 12-race series, the competitions were cut down to six races each, following several postponements due to lack of wind in the Victoria harbour.

With the upcoming 10th Indian Ocean Island Games (IOIG) scheduled for Mauritius from July 19-28, the Seychelles Yachting Association (SYA) decided to reduce the two series to allow the sailors making the national selection sufficient time to prepare for the Games.

In the Hunt Deltel Optimist Cup, Mathiot finished three times first and grabbed three runner-up spots to finish on top with a net seven points, finishing ahead of second-placed Fabio Bertola Thevenon who concluded the series on nine points.

With 12 points after winning one race, and grabbing two second-place finishes, along with two third places, Luca Marzocchi finished third overall in the series.

Stephanie Lalande was the best girl performer of the series, finishing fourth overall on 23 points. She had a third-place and three fourth-place finishes in four races.

Jakirah Radegonde finished fifth overall in the group on 33 points after raking fifth and fourth in the only two races she took part in.

Travis Ho-Peng ended the series in the sixth overall spot, after two fifth-place finishes in two races, earning him 34 points.

Last in the series was Laurent Contoret who earned 40 points after finishing fourth in the only race he took part in.

In the Suzuki Marine 4.7 series, Hoffman dominated the fleet, finishing first in her six races, earning her five points and placing her on top, ahead of second-placed Eid Florine who garnered 10 points.

Out of the six races of the series, Florine finished six times as runner-up behind Hoffman.

Tim Figaro finished third overall in the group on 20 points, after a third, three fourth and a fifth-place finish.

With three third-place finishes out of three races, Alison Hoareau was fourth overall on 23 points, finishing ahead of Jasmine Monthy who was fifth overall. Monthy registered a third and a fourth-place finish.

Last in the series was Marius Assary who earned 30 points after finishing fifth and fourth respectively in two races.

The following are the complete results of the Hunt Deltel Optimist Cup and the Suzuki Marine 4.7 Cup competitions.