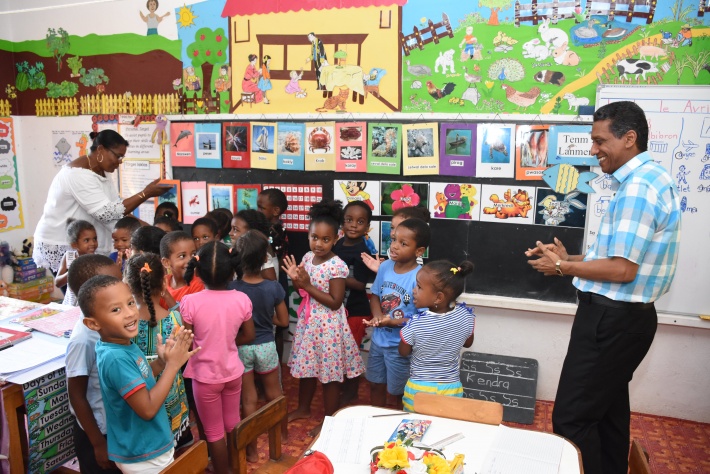 Staffing is among the setbacks the management of the Takamaka primary school is facing and is preventing it from carrying out some of its projects and initiatives.

This issue was brought to the attention of President Danny Faure and his delegation who visited the Takamaka primary school yesterday morning.

Speaking to the press after the visit and talks with the president, the school’s head teacher, Magda Rose said: “We are considered as the best primary school in terms of academic achievements but there are other aspects in terms of sport facilities we want to improve.”

“The sports facilities at the school are not for the Ministry of Education and Human Resource Development but are under the responsibility of the department of local government. We want these facilities to be improved and modernised to boost the development of our children. We have some interesting initiatives of our own which we want to carry out but cannot do so,” said Mrs Rose, noting that President Faure has given the school his commitment and has promised to look into the staffing issue as well as the availability of much-improved sports facilities.

Other issues the school’s management discussed with President Faure include the need for support facilities such as a covered seating area for the school’s security personnel, handymen/women among others.

President Faure’s visit was an opportunity for him to see the state of the school as well as interact with the teachers and support staff on their achievements and challenges.

Considered the best primary school for some years now, it was also an opportunity for President Faure to see how the children were progressing and he interacted with them on their studies.

Built on a prime location on the hillside of Takamaka, the primary school with 257 students has four crèche classrooms, two P1 to P5 classrooms and only one functioning classroom with 26 students out of the two P6 classrooms. It has 30 teaching staff and 10 support staff.

The visit started at the crèche located on the lower end of the compound and the presidential delegation was led by the school’s childhood coordinator, Amanda Albert.

President Faure toured the crèche which has two classes for both year one and year two for a total of 75 children. He interacted with the teachers and children during the sessions.

The children also showed and displayed some of their learning skills and abilities to an attentive President Faure, who is also a past teacher and minister for education.

From the crèche, the presidential delegation visited the school’s recreational hall on the same ground where religious services are held every Tuesday among other school’s indoor activities. The delegation then moved uphill to visit the administrative block, which also houses the school’s permanent dental service. President Faure was then introduced to the primary classes where he again witnessed the lessons going on and also interacted with the teachers and children.

Takamaka primary school has the best outdoor sports facilities among the schools in Seychelles but the presidential delegation was not too happy with the state of the multipurpose court managed by the department of local government. As for the playing field used by other athletes it is managed by the National Sports Council.

As the department of local government is maintaining only the other multipurpose court situated at the district’s office, a proposal has been made for the court at the school to be transferred to the Ministry of Education and Human Resource Development for better management so that it can benefit the students.

The accompanying photos taken by Thomas Meriton show President Faure and his delegation during their tour of the Takamaka primary school. 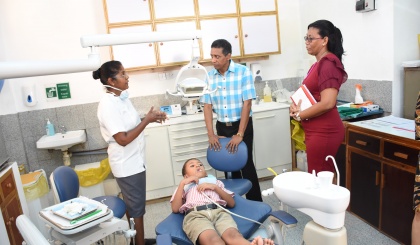 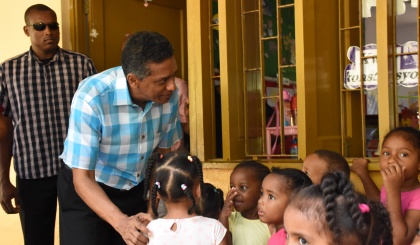 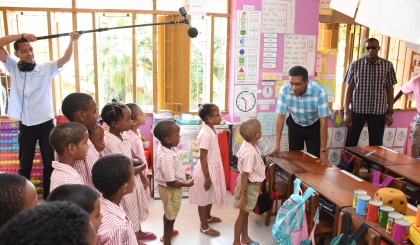