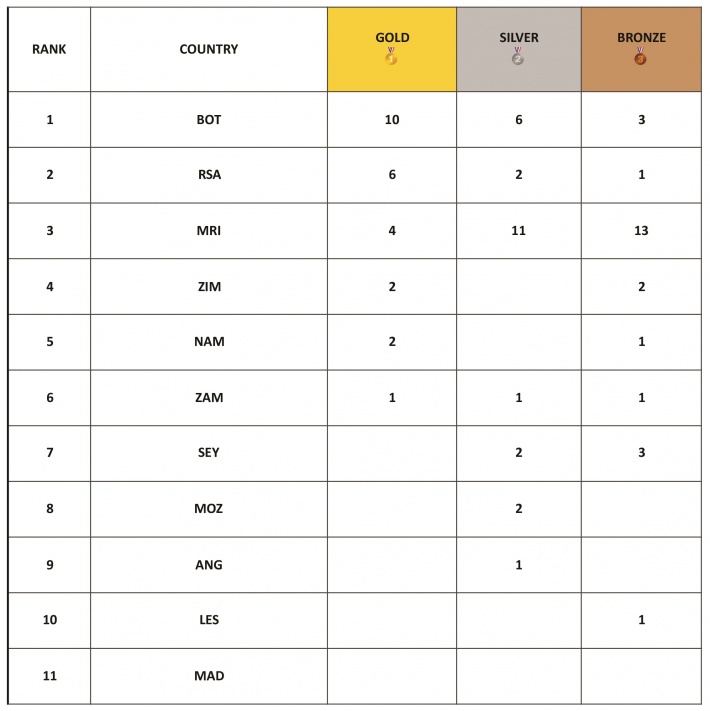 Hurdler Ned Azemia and discus throw specialist Dean Williams have won a silver medal apiece at the Southern Region Senior Athletics Championship as Seychelles finished seventh out of 11 countries with a total of five medals – two silver and three bronze.

At the Germain Commarmond Stadium in Bambous, Mauritius, Azemia clocked 51.84 seconds in the men’s 400m hurdles to take the silver medal behind Kemorena Tisang of Botswana with 51.48 seconds. Third was Bryan Police of Mauritius with 55.05 seconds.

As for Williams he was second out if four competitors to win the silver medal in the men’s discus throw event with a distance of 39.90m.

The discus gold medal was won by Mauritian Christopher Sophie with a best effort of 52.30m and third place went to his compatriot Fabrice Rajah with 38.00m.

After clocking 10.48 seconds in the heat to qualify for the final, Sicobo stopped the clock at 10.44 seconds for third place and the bronze medal in the men’s 100m race.

Gold went to Zimbabwean Ngoni Makusha with 10.33 seconds and Mauritian Jonathan Bardotier was second with 10.37 seconds.

As for Williams he claimed a bronze medal in the men’s hammer throw event with a distance of 48.86m to finish behind Mauritians Nicholas Li Yun Fong (gold with 61.19m) and Jean Ian Carre (silver with 55.97m).

Ronny Bristol was third in as many competitors in the men’s shot put with a best throw of 13m07 as Mauritians Sylvain Pierre-Louis (gold with 14.58m) and Stenio Noël (silver with 13.28m) dominated the contest.

The other Seychellois competitors at the championships with Janosh Moncherry (50.50 seconds for fifth place of the men’s 400m race and did not qualify for the final), Amelie Charles (12.50 seconds in the first heat of the women’s 100m and did not qualify for the final), Menjel Kilindo (fifth and last with 14.15m in the men’s triple jump), Debrah Servina (fourth out of five in the women’s shot put with 11.05m, and fifth out of six in the women’s discus with 35.51m), Shakira Joubert (25.48 seconds for fifth place in the women’s 200m final won by Namibian Beatrice Masilingi with 23.85 seconds), Ricardo Suzette (16.01 seconds for fifth place in the final of the 110m hurdles final won by Kemorena Tisang of Botswana with 13.92 seconds), Menjel Kilindo (fourth out of five with 6.44m in the men’s long jump won by Fredereich Pretorius of South Africa with 7.24m), Joshua Onezime (fourth out of seven with 2m in the men’s high jump final won by Tshwanelo Aeboe of Botswana with 2.17m), and Dean Williams (second out of four with 39.90m in the men’s discus won by Christopher Sophie of Mauritius with 52.30m).

At the end of the two-day championships attended by 11 countries, Botswana finished at the top of the medals ranking with 10 gold medals, s6 silver and 3 bronze. South Africa was the runner-up with 6 gold, 2 silver and 1 bronze, while host Mauritius was third with 4 gold, 11 silver and 13 bronze.

The following is the medals table.