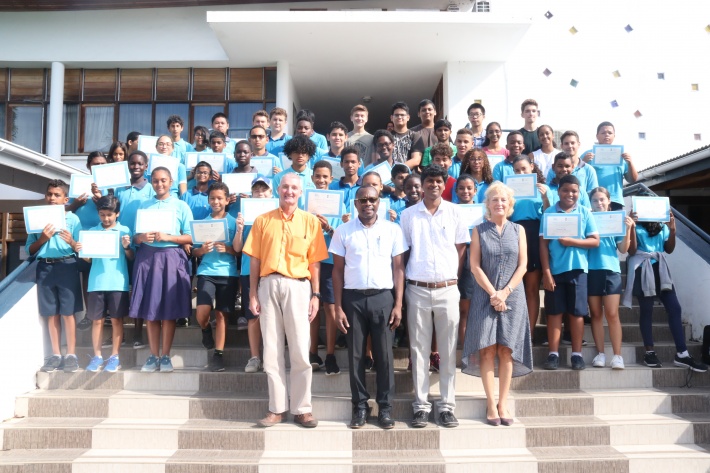 Seventy-two students from the International school who took part in a Science, Technology, Engineer and Mathematics (STEM) programme have been awarded certificates.

“The workshops, which started in October last year and continued up till May this year, were aimed at sensitising teenagers about the opportunities that await them once they graduate from high school in the field of STEM,” said Philip Hind, the computer science lecturer.

In her opening address the principal of the school, Madeline Woolfenden, told the students that there are some very exciting and interesting work being done by Nisti in the country and the school is honoured to be a part of that.

“Sitting among you are students that have had the opportunity to be involved in programmes conducted by Nisti such as application development, introduction to artificial intelligence and robotics so I’m delighted that we got the opportunity here today to celebrate what our students have done with this prestigious organisation,” Added Mrs Woolfenden.

“I would like to thank all students who participated in the programme and yielded amazing results. Science, mathematics and engineering are the most important tools in innovation and without them we would not have the modern world we have today,” said Xavier Esticot, the chief executive of Nisti.

He added that if Nisti is trying to sensitise students in the country about the benefits of the STEM programme it’s because technology is moving at a fast pace and it is up to the future generation to learn the new skills and knowledge to be part of this revolution.

“I look around and I see the future and with the success of this programme at International School we will be bringing STEM to public schools,” he said.

Dhruv Brahmbhatt, a student who took part in the programme, gave a short testimony about the importance of having a STEM programme.

“One of the main reasons I took part in the programme is to increase my knowledge on the subject as technology affects human lives,” said Dhruv.

He added that the programme persuaded him to consider pursuing a career in STEM.

Mr Hind noted that the students were very interested in the programme as they were learning about things that they were not aware about before.

He added that the school will have a robotics and coding club so as to keep the students interested in STEM even though the programme has ended.