‘Enkonparab’ is Robert Moumou’s second studio album which is officially on the market for gospel lovers.

The album, which is entirely in creole, incorporates a mix of reggae, dancehall, sega and moutya while staying true to gospel music.

“Every human being was created to praise God, hence I have come to do so with this album. There was a time in my life where I had lost faith but God revealed himself to me through his miracles that he has performed in my life and the miracles that I have seen while being a pastor in the evangelical church,” said the gospel artist.

‘Enkonparab’, which is a collection of 12 works written by Mr Moumou, is a two- year project where he worked on one song at a time, but production of the album however officially began in October last year.

“It was supposed to be released in March but with the pandemic taking over the world we had to delay the launch until now,” he said.

When asked why he keeps focusing on spiritual songs, Mr Moumou said that music reaches every single soul on earth.

“If you want to touch someone’s heart you have to go through their ears,” he said.

“When we were created by the Almighty, we were created to praise him. This is what has spurred me on to come up with this album that is my gift to people who want to praise God. Every human has his or her way of praising; some were given talents in counselling while others shepherd, but for me praising through singing,” he said.

The gospel artist added that he wants to bring gospel music to the forefront of the music scene as some of the songs being played on the radio today is not appropriate especially for younger listeners. He noted that musicians are role models whether they like it or not as many young fans look up to them so it is their duty to influence the youth positively.

His last album titled ‘Lafwa Radikal’ sold 800 copies and Mr Moumou said that it was very appreciated by fans and he hopes that this album garners the same appreciation.

He ended by thanking everyone who was involved in the production of the album.

‘Enkonparab’ will be on sale in music stores in town as well as on Praslin and La Digue at the price of R100 and R175 for the USB drive. It will also be available on Tropiks sounds and other platforms. 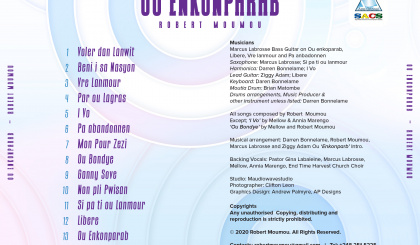