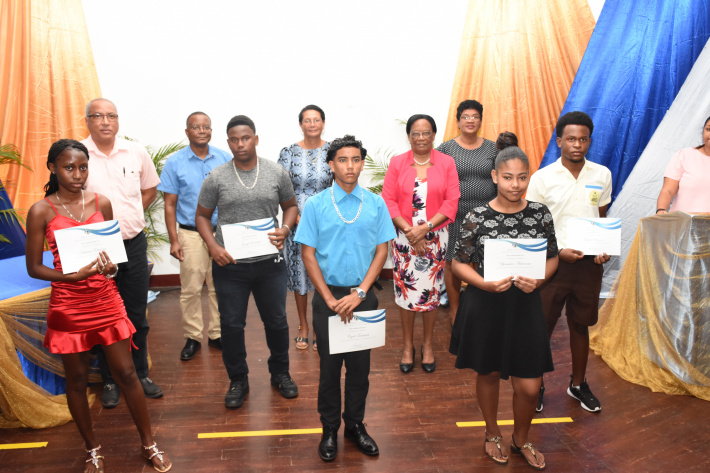 Some of the top achievers from secondary and Sals (Photo: Louis Toussaint)

Thirty-seven students were rewarded for their outstanding performance in the S5 National Exams, the DELF Scolaire Examinations, S4 IGCSE, S5 IGCSE and A Levels in an award ceremony held at the Seychelles Institute of Teacher Education (Site) Mont Fleuri on Friday afternoon.

In total the students won 46 awards out of which 41 were for the international examinations they sat for in 2019 and five (5) for the S5 National Examinations.

The awardees came from all government schools on Mahé, Praslin and La Digue.

For S5 IGCSE Examinations, the following were rewarded:

And for the A level Examinations the following were rewarded

Odile Octave the director general for secondary education commended the academic excellence of the students. “A performance I believe has been rooted in the focus, dedication, hard work and a desire to excel. It is the expectation of the ministry that the school continues to work hard to improve on the successes that have so far been achieved. We stand proud as a ministry because of the achievements of your students and your schools.”

She further said that behind every award, there is commitment from those who saw or created an opportunity to make a difference in the lives of the students. “They are not simply ‘doing their jobs’ – they are the people with vision who walk the extra mile with our students so that they are able to apply themselves and give us these remarkable results. In this respect, we applaud our dedicated teachers and school management team who remained engaged on this journey to excellence.”

All awardees received prizes and tokens provided by the Ministry of Education & Human Resource Development. 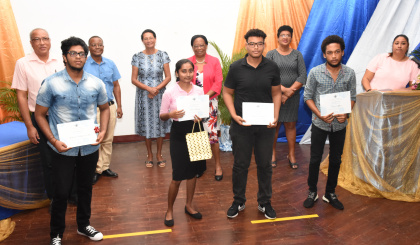