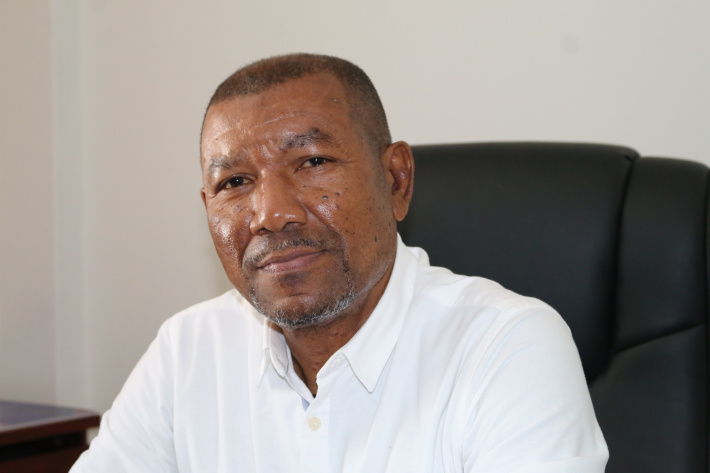 ‘I wish to revive the Moutya; this is my quest’

“I wish to revive the Moutya. This is my quest. It is an exceptional structural rhythm that we have been blessed with. We should preserve it. Moutya is our link with our ancestors. It is a form of music developed here and we shouldn’t let it go down the drain.”

Legendary musician Patrick Victor was appointed honorary cultural ambassador by President Danny Faure in August 2019. Mr Victor’s function is to promote the Seychellois culture locally, regionally and internationally. Following his appointment, Mr Victor has been engaged in various activities including at the international level. Following the coronavirus pandemic across the world, many lives and activities have been affected. Mr Victor shares his thoughts on adjusting to the new normal, lessons from his first international mission as well as plans to execute his role.

Q: With movement of people limited and almost all activities cancelled, the COVID-19 pandemic has struck the cultural life and tourism industry hardest in Seychelles. As the honorary cultural ambassador, what are you planning to do now that most events have been cancelled?

A: With this situation, myself and others involved in the artistic world have to readjust our plans and activities and this is what I continue encouraging those in the industry to do.

My portfolio not only covers national activities but also to promote our Creole culture regionally and at the international level. There are various strong-minded groupings and individuals in Seychelles doing various activities to promote our arts and culture. They have visions of what we should and can do to promote our culture. Of course, there are also national plans by the department of culture. For the past six months I have been collaborating with the department and I am also keen on what is happening in the districts.

The various associations I look forward to working with for example are the arts and music associations which are doing great both locally and internationally. I am also involved in an association called ZERITYE (meaning heritage). We are fascinated about promoting our roots and culture, food, way of dressing up, celebrating life, traditional medicine and many other aspects of our culture.

My plan therefore has been to merge the various plans and visions to synergize and work together. This will still go on. It is just a matter of readjusting our plans and finding ways of getting people involved. We shall find ways and means.

A: Yes, I see opportunities we can tap into. In fact, I have been working on this for a couple of months. I have been aware of the plans of some groupings this year, for example. While looking at their plans with the intention to share and propose some ideas that can help them diversify, I realised there are many programmes that can be aired on radio and television. Recitals, storytelling, plays among others can be done. Some people are doing this but we can tap into this opportunity more.

On the other hand, during the partial lockdown in Seychelles, I was contacted by the local representative of Zoom. He asked if I would like to do a ‘Patrick Victor Show’ online. It was a good idea so I agreed to do it. With my technical and other few people, we did a trial and surprisingly when I shared with other artists this opportunity some were already doing it on various media platforms.

COVID-19 or not, these are opportunities we should have tapped into but we took them for granted.

A: We can do it. We do not have to have Festival Kreol for example to express our ‘Kreolite’. We can promote our ‘Kreolite’ every day. For instance, those animating Creole radio shows can use it to speak authentic Kreol and not the Creole that we sometime hear on the radio.

From time to time, listening to the radio feels like the show hosts are still afraid of the colonial masters who insisted on speaking in English. We were punished in school for speaking Creole. But this is gone, we are an independent nation for some 40 years now.

There are a lot of Seychellois Creole aspects we can bring into conversations while communicating with the population. Of course, we are in a free world and you can speak some English but for a Kreol programme, I think that is an opportunity to promote Kreol language and culture. Sometimes instead of making fun of the Kreol culture, you could have people on air to talk about it. This is a kind call to radio presenters who are hosting Creole shows to do more to promote our culture.

On the positive side, during the past few months, some Seychellois have been engaged in promotion of our culture within their homes. Just recently, in my district of Bel Ombre, I could hear my neighbours singing. I was surprised not hearing the sound made by a hoofer player. Usually it’s the loudest noise you can hear at a party. That particular Saturday, I could hear people singing, drumming and there was rhythm. I realised that it has been years since I heard people banging items just to create rhythm and have fun in a traditional way.

The traditional bands – Kanmtole – is having a revival.  This is good and we can spread it as a form of entertainment.

Q: You went on your first mission as honorary cultural ambassador just before the COVID-19 pandemic struck. Tell us about your trip to Paris?

A: Alongside other delegates from Seychelles, we attended the 40th Session of the United Nations Educational, Scientific and Cultural Organisation (Unesco) general conference held in November. There were many talks and presentations on cultural activities and life from various cultures around the world.

It was a great opportunity to listen to representatives from various countries speaking about their plans to promote their cultures in their nations, especially small island states who face almost the same challenges in promoting their cultures. It was also interesting to see how we had to be careful because besides just promoting our own cultures, we also had to be diplomatic. I saw languages molded and enveloped most times in certain diplomatic pieces and there were countries audacious enough to call a spade a spade.

I came to realise that Seychelles should not just go to such events to talk but also showcase our culture. I have been advocating for this, such that on such occasion, we showcase an aspect or two of our culture. It could be our food or dance. There were countries who did this and this was insightful. Saudi Arabia showcased their culture in a bold way at their pavilion. Seychelles can also have traditional groups form part of the delegation even if we have to look for sponsors. We can promote many aspects of our culture during such events.

My other observation is that our artists should know about such events taking place. It should not just be a government thing. These events are for the people. Artists, I challenge you to do some research on such events, know what the events are about and how you can get involved in a more powerful way. Put yourself out there.

Q: You are a legendary musician with interest in promoting the Seychellois culture. However, with an influx of the Western culture, some authentic Creole activities are on the verge of disappearing. What key areas have you identified that you wish to revive and why?

A: I wish to revive the Moutya; this is my quest. It is an exceptional structural rhythm that we have been blessed with. We should preserve it. Moutya is our link with our ancestors. It is a form of music developed here and we shouldn’t let it go down the drain.

The department of culture is currently fully engaged in getting the Moutya revival going. I will be going within the villages to meet various people in this regard.

The Moutya is a ceremony. What was happening at ‘Bazar Labrin’ is regrettable. I have a belief that an influx of tourism has a bad influence on a people’s culture. People tend to do anything to make money and many tourists fall for this. We also have hotel managers who sometimes do not care to know about components of a cultural entertainment band. We have to get our people who used to play Moutya to come out and teach the rest.

It is to be known that at a certain point in our history, Moutya was banned. And so, the players went into hiding. I understand that the law has been repealed. If this is true, then let us go out and talk about it, practice it and experiment. Let us find out why it was banned. Was there a secret in the ‘Le LeleleleleTya la lala’, or was it the sound produced by the three drums with different functions, getting through to one’s blood and senses thus making people go into a trance?

The ceremony starts with chanting. It was like a religious ceremony. We need to find out more about the Moutya. I am glad that the department of culture is on board.

Q: What is your five-year-plan as honorary cultural ambassador?

A: I have a plan. To revive our culture. Not only the Moutya but also the Kanmtole. Kanmtole is our rich French heritage. They brought it to our islands and the slaves learnt it from them. Kanmtole is so elegant when it is danced the right way.

I am also well known in the Indian Ocean region. I want to use my popularity to create more connections. The plan is to establish fruitful collaborative friendships so we can carry out activities within the region and beyond.

Q: What is your message to the people of Seychelles?

Eventually, when the tourists come back, they will find Seychelles richer culturally; refreshed and ready to show them what we have as a people.

Mr Victor has settled into his new office located on the 4th floor of Premier Building Annex, Victoria. He can be reached via Email: pvictor@gov.sc

Contributed by the department of culture