Yesterday’s meeting between the Retailers Association and the National Assembly (Photo: Jude Morel)

The Retailers Association met with members of the National Assembly yesterday to clarify and bring light to the challenges local retailers are faced with.

A panel consisting of the association’s chairperson, Satya Naidu and secretary Louisianne Jacques, and several other members were present to discuss the pertinent issues that are affecting retailers as a result of COVID-19.

Around a dozen members of the National Assembly (MNAs) from both political parties and including deputy speaker Ahmed Afif were in attendance.

Although shops selling groceries were considered as essential services during the lockdown, the association raised its concerns in regards to retailers who have been denied financial assistance from the government and loans from bank, and now are even being refused credit from their suppliers.

It was stressed that retailers have not been left untouched by the impacts of COVID-19 and it would be wrong to assume every shop is performing well financially.

“The business sector is in big trouble,” Ms Jacques told the MNAs.

The association clarified that most retailers rely on importers and suppliers that are increasing the prices of their products due to various factors in the likes of a surge in foreign exchange rates.

On their part, retailers can only accept these already increased prices and add their own mark-ups, which most association members attempt to keep at about 15 to 20%.

Mr Naidu acknowledged that there are some “bad apples” in retail that are taking advantage with exorbitant prices, but noted that the association has started an exercise to visit retailers and identify instances of malpractice.

They have already covered 26 shops in their ‘shop to shop’ exercise which started over two weeks ago.

Despite the fact that there are over 400 retailers in the country the association consists of around 275 registered members.

“We are seeing a lot of retailers that are operating as per regulations; they are respecting opening and closing time, are employing Seychellois and some are even training them[…] If there are evidences that show that a retailer is not abiding by regulations, then we remove this bad apple as a member,” Ms Jacques explained.

She also noted that the Retailers Association is working with the employment department to train Seychellois to join the retail sector even though retailers face a myriad of issues with local workers.

“We need Seychellois to work in our shops but we need them to be interested and committed to the work,” Ms Jacques said.

In regards to yesterday’s meeting, Ms Jacques said: “This meeting with the National Assembly is very encouraging and shows that we are not in this fight alone and we are hoping to have similar consultations with other relevant authorities.”

On his side, Mr Afif said that members of the National Assembly also clarified that their powers are limited to legislating, bringing motions and asking ministries and government agencies questions.

“But we have been able to understand their position better and the session has been an educative experience for us,” he concluded. 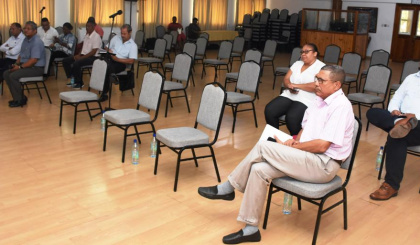