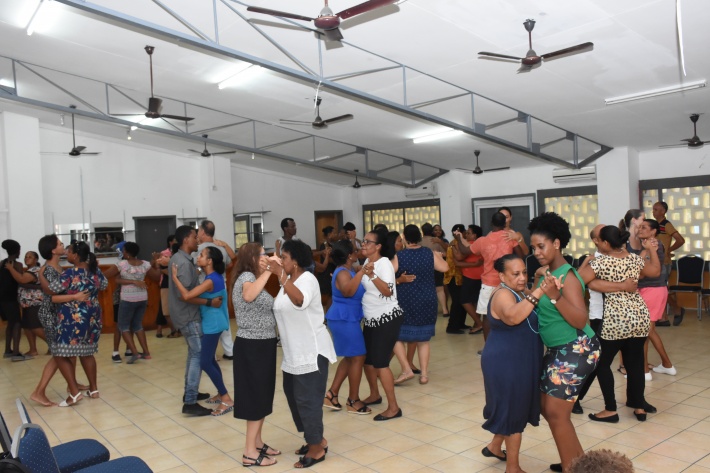 A training class in full swing

With the aim of setting a standard by which competitions will be judged, the department of culture has been holding traditional dance classes which started last week at the former maritime school, Mont Fleuri.

In total 60 eager participants are taking part in the classes to learn the new standardised way of ‘kontredans’ and ‘ladans senp’. These participants are being taught by a veteran in traditional dance, Marietta Matombe, as well as her two assistants Eddy Rose and Nathaniel Volcy.

“In the past we have noticed in competitions that some people are not satisfied as the style of dancing differ from group to group. We want to have a standard by which we will be able to judge performances,” said Ms Matombe.

She added that traditional dance instructors in schools went through a workshop in order for them to learn and teach their students the new standardised way.

“Everyone who will be participating in the national competition this year will be judged by the new standard,” said Ms Matombe.

The classes are divided into two groups where new participants are learning about ‘landans senp’ which is the first volume before moving to ‘kontredans’ which will be volume two.

The second group, who is made up of people who already know the steps in traditional dancing but lack knowledge of the new standardised version, will also be starting on volume one before moving on to volume two.

The traditional dance class will take place for six months where the participants will learn various steps involved in these two forms of dance. At the end of the training, they will be awarded a certificate to show that they have successfully learned the standardised way of dancing.

Admission to the class has now been closed but for those wishing to take part in it have a chance next year with Ms Matombe and her instructors.