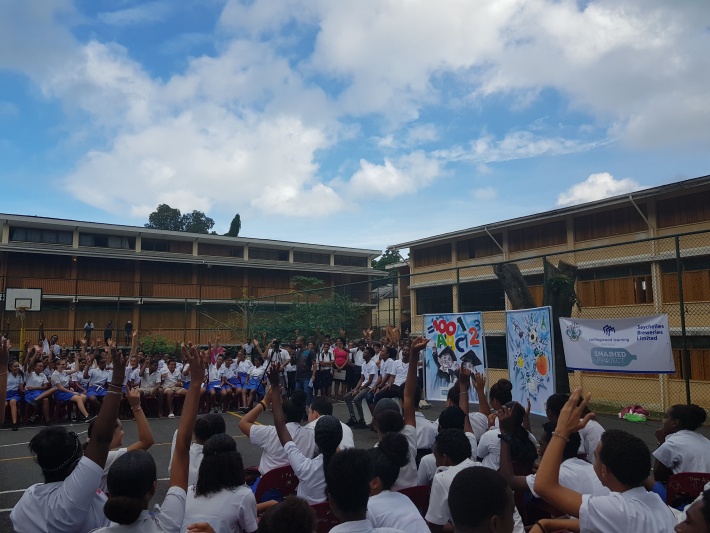 The over 500 students from S1 to S5 gathered at the multipurpose court of the school to watch the 30-minute performance by the 3 actors from Komik Lokal which was followed by the interactive workshop led by Kurt Lagrenade.

The head teacher of the Beau Vallon secondary school, Philip Morel, said that it was good to see the enthusiasm and engagement of the students throughout the whole performance and their active participation during the workshop component.

Mr Morel said that he felt SMASHED addressed the issues which the young generation has to deal with especially at a time when there is a lot of awareness on the dangers of alcohol abuse.

Joey Tirant of S5 said that he has learnt a lot from the performance about the consequences of bad choices which can impact his education and lifestyle.

Joey said that from the play he has seen how when young people indulge in irresponsible behaviour such as underage drinking, can be at risk.

Asked about the language which is used in the play, Joey said that it is very appropriate as it makes it a lot easier for young people his age to understand and identify with.

Diane Larame of S4 said that she enjoyed the play as it was very funny but there were lots of messages to deduct from it.

She said that it was very easy for everyone to understand because of the language used, adding that even students from S1 to S3 were able to enjoy it.

Diane said for her what she has learnt from the play is that you can still have fun without consuming alcohol and if your friends do not respect that you do not want to use alcohol, then they were never your friends.

SMASHED is an interactive programme from Collingwood Learning in the UK, designed to address the issue of underage drinking. The project implementation is being fully sponsored by Seychelles Breweries Limited.

Evaluation of the programme is done through a pre- and post-questionnaire which the students have to fill in.

The next school on the programme which the SMASHED crew is to visit is Belonie secondary today.