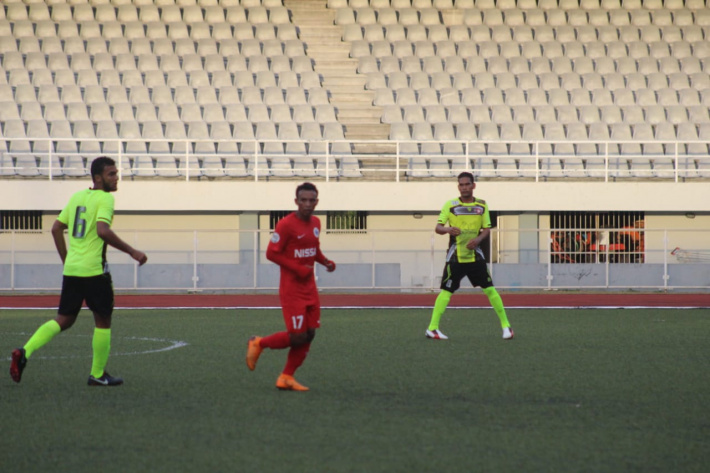 Northern Dynamo were eager to bounce back after losing to St Louis last week but it was St Michel who made the brighter start as they went close as early as the 2nd minute from a stinging shot by Malagasy Evariste and Dynamo goalkeeper Mario Banane spilled the ball but Antonio Ratafina latched onto the loose ball but he was signaled for offside by assistant referee Gerald Pool as he struggled to tuck home the loose ball.

Glacis-based Northern Dynamo also had a decent chance in the 14th minute from Malagasy Rajamana’s inswinging corner which was met by Marlon Sophola’s glancing header on the edge of the penalty area but the ball sailed wide.

A minute later, St Michel broke forward with speed as Evariste carried the ball into the opposing penalty area and he set up his compatriot Francis who looked odds on to score but Aldo Dufresne did well to track him down and tackle him in the nick of time to clear the danger.

Northern Dynamo stunned St Michel in the 25th minute from a lofted free kick by their captain, Gambian Modou Jallow and St Michel defender Yannick Manou scored in his own goal but amazingly assistant referee Hensley Petrousse raised his flag to disallow the goal. The goal should have stood as it was an own goal.

The league leaders though had the upper hand and on the half hour mark, Evariste made the most of a loose ball to rifle it at goalkeeper Banane from the edge of the penalty area but the Dynamo custodian saved well.

Anse Aux Pins-based St Michel had another gilt-edge opportunity in added time when Malagasy Hassan Aly found space outside the penalty area to unleash a thumping shot but goalkeeper Banane smothered the ball at the second attempt for a 0-0 score at half-time.

Northern Dynamo showed more attacking intention in a very entertaining second half and in the 63rd minute, Gambian striker Musa Njie spread the ball out to Aldo Dufresne who produced a glorious cross to Carlos Onezime but he guided his glancing header off target to fluff a great scoring opportunity.

Two minutes later, Northern Dynamo were just unlucky as Marlon Sophola met Rajamana’s teasing corner with a towering header which was goal bound if not for a goal line clearance by defender Yannick Manou.

The players of coach Bryan Bastienne opened the scoring in the 81st minute when Lucas Panayi played a through ball to Rajamana in acres of space and he skipped past the advancing goalkeeper Jalyl Servina before stabbing the ball into an empty to make it 1-0.

Northern Dynamo’s Dufresne, who had a good game, almost gifted their opponents a goal in the 85th minute as he was caught dithering on the ball and St Michel broke swiftly and Francis raced clear before he laid the ball to substitute Nelson Laurence who shot agonisingly wide.

St Michel’s last chance to secure at least a point came four minutes into injury time when Aly played a free kick to Jimmy Bijoux who let fly a cracking shot but the ball flew over the crossbar to leave Dynamo to collect all three points and inflict a fourth defeat on league leaders St Michel who had a six-point lead at the top of the league standings and Dynamo manager Nigel Michaud-Payet was very happy with the result.

“This is a very good result and surely our best performance this season and therefore I must congratulate my players and I hope this showing will inspire us after a bad loss last week,” manager Michaud-Payet related to Sports NATION.

As for St Michel manager Andrew Jean-Louis, he told Sports NATION that his team should have won this match if they had taken their chances.

“We created enough opportunities to win this match but we failed to convert and lost to a determined opponent whose goalkeeper kept them in the match with some outstanding stops in a very exciting match, but we will have to try and bounce back to maintain our advantage in the league,” the St Michel manager said.