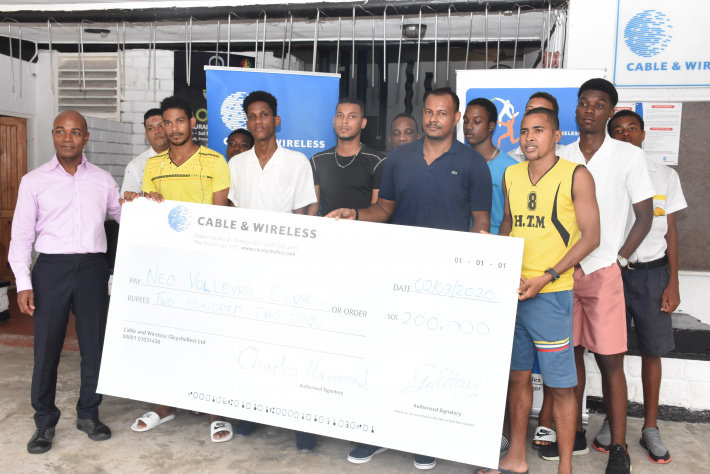 After twelve years, the partnership between local telecommunication company Cable & Wireless and the Neo Volleyball Club is still going strong with the former still extending its arm in support of the country’s sports development.

Cable & Wireless Seychelles yesterday presented a cheque worth R200,000 to the Neo Volleyball Club as part of its long-term commitment to promote sports which encourages a healthy lifestyle and also helps to keep the youth off the streets and bad influences.

Chief executive of Cable & Wireless Seychelles, Charles Hammond, presented the cheque to the manager of the Neo Volleyball Club, Ralph Dine, during a small ceremony at the Exiles Club, in the presence of the company’s staff and members of the volleyball club.

The partnership between the two parties goes back to 12 years with the formation of the volleyball club on the Cable & Wireless court, starting with a handful of players.

As for the sponsorship, it has been going for the past three years.

The sponsorship comes under the umbrella of the Cable & Wireless Seychelles Foundation launched in 2005 and which functions under the theme ‘A helping hand for a stronger community’.

To date the company has undertaken many initiatives under the foundation’s umbrella which is positioned as an extra to the company’s normal donation activities.

Its three key objectives are: to establish and build partnerships with charitable and community organisations focusing on groups with ‘special needs’, to actively contribute in the strengthening of communities in which we live, and work and to enhance the Cable & Wireless brand by promoting its role as a responsible corporate citizen.

On behalf of the Neo Volleyball Club, Mr Dine thanked Cable & Wireless for its continuous support and promised that the fund will be used wisely and accordingly based on its sole purpose which is youth and sports development.

On behalf of Cable & Wireless Seychelles, Mr Hammond said that as a company that is deeply rooted in the community, it is always a pleasure to extend its support, especially in helping and bringing its contributions towards youth development in the society.

Over the years, through the sponsorship of Cable & Wireless Seychelles, the Neo Volleyball Club have expanded and now have three teams – Neo Boyz, Ton Neo and Neo Youth – who cater for players all different ages.

Mr Dine also revealed that for the new season, the club will be fielding a women’s team to bring more competition and encourage more girls and women to be actively involved in sports activities.

Neo Boys, one of the three male teams of the Neo Volleyball Club will be in action in the Seychelles Volleyball Federation (SVF) Shield on Saturday against Premium Spikers at the Palais des Sports.

The traditional SVF Shield matches are the curtain raiser of the new volleyball season.