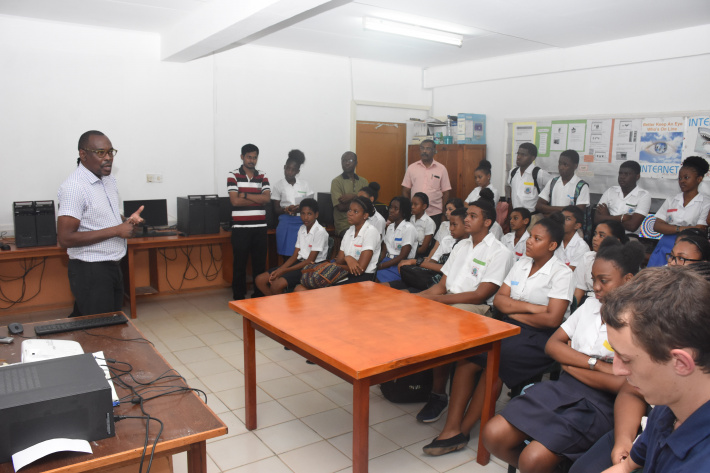 Following the establishment and success of the Science, Technology and Innovation Club at Anse Boileau secondary school last year, a new seven-week Science, Technology, Engineering and Maths (STEM) programme was officially launched last week at the school during a brief ceremony.

STEM is based on the idea of educating students in four specific disciplines in an interdisciplinary and applied approach.

Launching the programme, the chief executive of the National Institute for Science, Technology and Innovation (Nisti), Xavier Estico, said he is happy to be back at the school after a year to launch the second programme which aims to foster innovation and entrepreneurship among the younger generations, who are the future doctors, pilots, scientists and engineers.

“You are the future but you are here today and it starts here. Seychelles is a high-income country and if we look around, there are lots of changes and such changes are driven mainly by new and emerging technologies which are changing the face of the future. We want you to show an interest in technology and technological developments as we are on the brink of the fourth industrial revolution and Africa cannot afford to be left behind,” Mr Estico said.

CEO Estico also noted the collaborative efforts between Nisti and the Ministry of Education and Human Resource Development to incorporate STEM education into the school curriculum as of primary-level, in a bid to foster ingenuity and creativity, encourage problem solving, teamwork and experimentation among pupils.

Mr Estico also noted the achievements of Nisti and its initiatives including the participation of keen students in internationally-held robotics competitions over the past three-years, urging the students to work hard, demonstrate an interest in the programme and to continue to study and teach themselves through means such as content sharing platforms and apply the knowledge gained to other projects in and around the school and at home, even after the seven-week period.

Of the topics that will be explored throughout the course are robotics, space and air space management and frontier technologies and sustainable development, among others. The programme also makes provision for the pupils to visit places such as the airport where new technologies are used.

The head teacher of the school, Jeanne Labiche, thanked Nisti for the initiatives that serve to encourage pupils to show more interest in the four subjects which could potentially impact on their future career choices.

The students experienced their first STEM session with a brief introductory session comprising the programme overview. 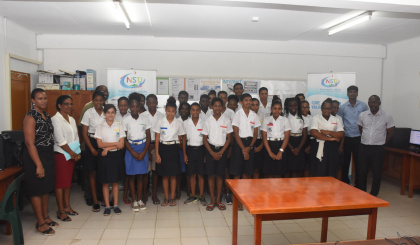 A souvenir photograph to mark the occasion (Photo: Louis Toussaint)