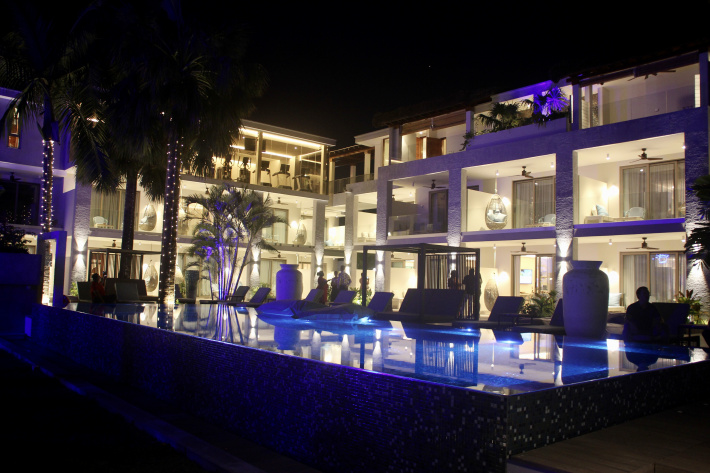 Described as the jewel of Côte D’Or Praslin by some, Le Duc De Praslin, a renowned hotel establishment on the second most populated island in Seychelles, yesterday officially opened the doors to its ‘Ocean Wing’, a new addition to the hotel.

The ‘Ocean Wing’ comprises 20 modern and well-designed deluxe rooms of around 55 square metres, all with an oceanic theme to reflect the vision of the hotel’s managing director and owner, Robert Payet, as well as to mirror the sea and sand a few metres away.

Aside from the deluxe rooms, the L-shaped wing also boasts a rooftop gym overlooking the new 16 metre magna swimming pool and a spa.

According to Mr Payet, the extension was conceptualised and designed with the modern-day traveller in mind – the young and vibrant tourist who is always seeking for Instagram-worthy locations and establishments.

“It was a flash dream, it only happened two years ago and it took about one and a half years to build, so I came up with the project less than a year before construction. It wasn’t a long dream project, it was quite quick,” he told Seychelles NATION.

“I was very lucky to be able to get one of the best contractors, Vijay Patel, to undertake the ambitious project.”

The R50 million investment required financial assistance from two banks – Nouvobanq and Barclays, now Absa – which he stated was not quite easy to gain.

“Bringing things to Seychelles, Praslin especially, is not that easy. We get delays with boats and everything, but we also got a bit of hassle with the bank especially with Barclays,” Mr Payet said when talking about the challenges he faced.

“At the same time we were taking out the loan, Barclays Seychelles was changing to Absa and that was not an easy change for me[…]the relationships and trust that I had with local bankers were not the same with the South Africans who were taking over the bank and who didn’t know about you. Everything had to change – all the rules and procedures. So it was quite a hassle, especially in the middle of the project.”

But what makes the ‘Ocean Wing’ special from other hotel extensions?

“I wanted the project to be different from other hotels, and even from my own other hotel rooms. I really wanted to do something geared towards the ocean theme but, most importantly, I wanted something very modern that would attract the younger generations of client. We all know that, in the next years, these are the generations that will be coming to Seychelles so we also have to make sure that Seychelles has these types of establishments that are up to the expectations.”

“Seychelles has become a very boring destination in terms of the design, furniture, lighting, concepts of the rooms and everything. But it must adapt.”

Mr Payet noted that many tourists have paused at the new ‘Ocean Wing’ to take pictures, which shows that Le Duc has brought about something different and that it is definitely an Instagram-worthy location.

Mr Payet also spoke of future projects in the pipeline which he hopes will help transform Le Duc into a vibrant, on fleek, place-to-be where one can enjoy a hedonistic lifestyle experience.

The Le Duc compound already holds the Tapas Lounge, the go to entertainment place for many Praslinois, especially during weekends.

Le Duc was started by Frank and Elodia Payet, parents of Robert Payet, and slowly grew from a villa of three rooms to an additional 6 rooms, after which Robert, with his drive and vision, helped transformed into a medium-sized hotel.

With the addition of the 20 deluxe rooms, Le Duc now has a hotel capacity of 61 rooms.

In his speech for the occasion, an emotional Mr Robert hailed his parents for the foundations they laid for him to expand on.

The wing’s new spa, Elodia Spa, bears the name of his mother in her honour.

On his part, Minister Dogley noted that the ‘Ocean Wing’ is a perfect example of what Seychellois businesses, particularly Seychellois hoteliers, can achieve irrespective of fierce competition from outside hotel brands.

He further praised Mr Payet for his dedication and ambition.

“I am very happy to see that there are more young Seychellois who are getting into the business tourism accommodation and who are investing in high quality and luxurious state-of-the-art accommodations,” Minister Dogley expressed.

The customary ribbon cutting ceremony was done by Vice-President Meriton, Minister Dogley and Mr Payet and his family, and this was followed by tours of the bedrooms, gym and spa.

The gym is equipped with the latest equipment needed for total body workouts and even has a fitness instructor, Michel Payet, on hand. It opens from 6 in the morning to 8pm Monday to Sunday, and is being made accessible to locals as well as tourists residing in other hotels or guesthouses. 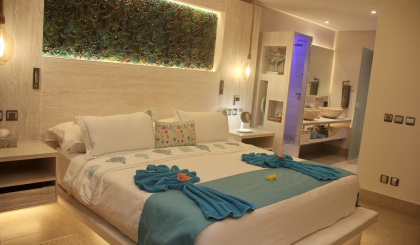 One of the deluxe rooms (Photo: Romano Laurence)